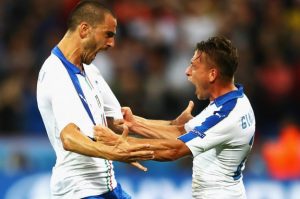 Italy proved their critics wrong with a brilliant performance in their first Euro 2016 match against Belgium.

Antonio Conte’s men recorded a comfortable 2-0 win over Red Devils in a derby match of the “Group of Death” sending tournament’s favourites Belgium to lick their wounds before their next game that could decide their faith in the competition.

It was Sunderland’s Emanuele Giaccherini who scored Italy’s first goal after a brilliant assist from Bonucci, while Graziano Pelle made sure of victory in the dying moments of the clash, finishing off a fine counter-attack.

With Sweden and Ireland drawing 1-1 later today, Conte’s team already sits top of Group E in comfortable position ahead of their next group game.

Here are the five things we learned from tonight’s game:

Chelsea fans will have been pretty pleased with what they saw tonight as Blues’ new boss Antonio Conte prepared a tactical masterpiece to dispatch Euro 2016 favourites Belgium right from the start of the tournament.

Azzurri had a clear game plan from the off. They wanted to frustrate the rivals with their tight defending, primarily using their wing-backs Matteo Darmian and Antonio Candreva to counterattack wide threat.

Having fielded a 3-5-2 team, Antonio Conte turned to the formation he mastered during his days with Juventus with his brick wall of Barzagli, Bonucci and Chiellini looking impenetrable from start to finish.

Italy finished the game with their 17th clean sheet at the Euros, more than any other team in the competition’s history, which only serves as another proof of their tactical dominance. With two timely goals they did not only manage three points, but they also managed to break Belgium’s spirits, as Wilmots’ men face a tough challenge getting back up on their feet following a dismal performance.

Star-studded team is simply a not enough of a guarantee for success. Belgium are packed with quality and are not short on self-belief and confidence, but tonight’s loss to Italy revealed a shocking lack of passion which make a two-year’s worth of labouring to reach the status of European giants a wasted time after the 2-0 defeat.

The wait for Belgium’s golden generation to blossom continues as Mark Wilmots’s men lacked cohesion, which can ultimately be attributed to their lack of experience at the continental stage.

This is the first time that Belgium have qualified for European Championship finals since 1984, which was also held in France, and it is also their first appearance since 2000 when they hosted the tournament.

Lack of experience against the veteran side such as Italy proved costly as Belgium suffered a disappointing loss, sixth in their last 8 games at Euros, that will have been a major blow to team’s morale.

Everton striker Romelu Lukaku has perhaps been the biggest disappointment for his team tonight.

The 23-year-old Belgium forward has had a brilliant season behind him as he netted 18 Premier League goals in 37 appearances, alarming the Europe’s biggest clubs who are expected to line up in attempt to sign him after the Euro 2016.

His poor performance against Italy gave international scouts little to put in their notes as Belgium target man has had one of the worst nights of his career.

Disappointing movement and terrible first touch were followed by utter lack of passion and willingness to go behind Italy back line and try to make something out of his physical dominance.

With seven misplaced paces, no chances created, no take-ons and no aerial duels won it is fair to say that former Chelsea striker will be keen to forget this night as soon as possible.

Eden Hazard has gone from Player of the Year to Chelsea flop in just a season’s time and his poor stretch continued at the international level as well.

Chelsea playmaker has had another frustrating night defence-wise as his lack of movement towards the back line of his team has once again been put under the spotlight.

Having been fielded at the left hand side position, Hazard was expected to run back to help Vertonghen in the back, but his porous movement resulted in Tottenham man being forced to work twice as hard to keep Courtois safe in the first half.

Belgium changed their tactics a bit with the introduction of Mertens and Carrasco as Hazard was allowed to slot in the No 10 position with Felllaini behind him to cover up defensive tasks. Manchester United midfielder ended the game with 48 passes completed, 7 chances created and 3 interceptions made which allowed Hazard more freedom in attack.

Ultimately, it was Eden Hazard who was the most agile player alongside Kevin De Bruyne for Belgium in their overall disappointing outing against Italy.

Hazard will be in for a difficult summer as Antonio Conte is unlikely to tolerate his lack of defensive work and we should not be surprised to even see Belgian dynamo leave Stamford Bridge before the transfer window closes.

Togetherness the key for Italy

Cohesion, unity and solidity proved to be key points in Italy’s triumph at the start of the 2016 European Championship finals.

Conte’s men took their fine form in qualifying into Euro 2016 to record a well-deserved win. Italy were one of four teams alongside Austria, England and Romania to remain unbeaten during the qualifying process and their form continued thanks to impressive team performance.

Every single player in Conte’s team starting from the veteran goalkeeper Buffon and all the way up to Eder in attack showed great determination and desire which makes Azzurri emerge as favourites to go all the way in the competition.

Having been described as one of the weakest Italian teams in years, Conte’s men have done enough to prove all of the doubters wrong in their opening match already.

Other results this evening