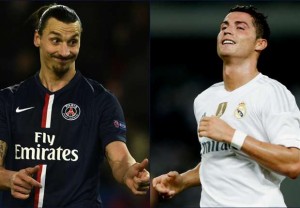 All square at Parc des Princes

The game between two undefeated sides this season caused a great deal of attention in the public, with the main focus set on two household names Zlatan Ibrahimovic and Cristiano Ronaldo who have recently become all-time top scorers in their respective clubs.

With the top place in Group A at stake, both teams opened the game cautiously and we haven’t seen many chances in the first twenty minutes of the game, with just a few shots on target at either end.

Real Madrid’s Marcelo tried his luck early on ripping a long-distance shot which went narrowly wide of the left post. On the other side, it was Blaise Matuidi who stood out with his effort from about 19 meters, but his shot was easily stopped by well-positioned Keylor Navas.

With both defence lines well locked in front of the goalkeepers’ area, it took 26 minutes of play for the first clear-cut chance created by Toni Kross, whose excellent through ball was met by Jese inside the box, but the Real Madrid striker was denied by a stunning save from PSG goalkeeper Kevin Trapp.

From that moment onwards the Spanish club were a more dominant side in the first half of the game. Cristiano Ronaldo tried his luck at the half-hour mark, when he met an accurate cross in the box and headed towards the Trapp’s goal, but the Paris Saint Germain shot-stopper steered the ball clear for a corner kick.

Only a minute later PSG goalkeeper pulled off a fantastic save to deny Cristiano Ronaldo yet another excellent header.

Another fine scoring opportunity for Real Madrid came in the final stages of the first half with Casemiro creating himself some shooting space and testing his luck from distance. His well-placed shot to the left post was saved by, in this game, excellent Kevin Trapp.

Real Madrid’s dominant first period came to a close with no changes on the scoresheet, but eagerly awaited fixture proved to be an interesting and highly amusing affair after first 45 minutes.

Paris saint Germain opened the second half in full throttle, and it was Edinson Cavani who came close to scoring four minutes off the mark. The Uruguay international picked up a fine cross from Maxwell, but his shot went just wide of the left post of Navas’ goal.

Both teams were working hard to break the deadlock with Cristiano Ronaldo on one side and Angel Di Maria on another testing their luck, but with no success. Real Madrid’s all-time top scorer picked up a nice pass from Marcelo with a shot from inside the box, but his effort blazed near off the post. The Argentine, on the other side, fired from the edge of the penalty area, but Keylor Navas was well positioned and didn’t allow the ball in.

Javier Pastore and Lucas Moura were brought in to replace Edinson Cavani and Angel Di Maria, respectively, and the pair made an instant impact on their team’s play. Brazilian Moura was found with a perfect cross who put his header high over the bar. The same player tried to utilize his fresh pace against the Real Madrid defence but was denied of making a shot towards Navas’ goal.

Couple of more half-chances were recorded on both sides of the pitch, with Zlatan Ibrahimovic and Cristiano Ronaldo attempting to break the deadlock until the end, but the final whistle will have been met with a sense of general discontent as the game came to a closure with a goalless draw.

With compact defending taking centre stage at this eagerly-awaited affair, the total of almost 47,000 people in attendance will be disappointed by the final result of the game and a goalless stalemate, which made no changes to the standings in Group A.

Real Madrid remain at the top level on points with the French champions. The two rivals remain on course for the promotion to the elimination stage, with Malmo and Shaktar left with no chances of making progress.

In another exciting game of the night, Manuel Pelegrini’s men took it to the dying moments of the game against Sevilla to secure the much needed win in Group D. Their Spanish visitors took the lead at the half-hour mark through Konoplyanka, but Manchester City managed to equalize only six minutes later thanks to an own goal by Rami.

With no changes to the scoresheet for the most part of the second half, Manchester City’s fans were almost left brokenhearted until Kevin de Bruyne used his composure to slot home after a pass from Yaya Toure and earn his team important three points which keep the English team up next to Juventus in the chase for the qualification to the next stage of Champions League.

Other Results This Evening

Juventus vs B. Monchengladbach 0-0