England have to change to be successful at international tournaments 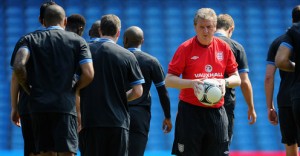 England bowed out of Euro 2012 at the quarter-finals stage courtesy of a 4-2 penalty defeat to Italy, after the game finished 0-0 in normal and extra-time.

In truth England should haven’t have even made it to penalties because the Italians could and should have wrapped the game in up in open play.

England did show some good spirit to progress in this tournament but sometimes teams need more than spirit and fight to be successful. England are supposedly one of the top ten football countries in the world and should really have performed better than they did.

England’s biggest problem against the Italy, and in some their other games was not being able to retain the ball. The England team looked like they couldn’t even locate one of their teammates in the second half against Italy, let alone pass the ball to one of them.

Football is a simple game. If you have the ball the opposition can’t score and you have more chance of scoring a goal, simply isn’t it? Well not for England time and time again they gave the ball back to Italy and gave their opponents the chance to do something with it.

Its no coincidence that Germany and Spain are rated as two of the best teams in world football at the moment. Both sides are teams that are fantastic in possession of the ball. The Germans were not synonymous with playing passing football, until they completely re-thought their whole football structure.

Germany now have a team that plays exciting, attractive football with players that can pass the ball to each other. Everybody knows about how Spain play and keep possession of the ball. Possession football is the way forward for England.

There is nothing technical about passing to a teammate. It’s something that can be worked on in training.

Whether former-Swansea boss Brendan Rodgers can re-create that style at Liverpool remains to be seen but certainly a lot of his players who play for England could certainly do with a lesson in ball retention.

Italy had near complete control of the quarter-final clash. There was one reason for that, midfielder Andrea Pirlo. The Juventus schemer was fantastic. His ability to pick a pass and find space was second to none.

He made the game look so effortless. England couldn’t combat his ability and he was basically given full license to do whatever he wanted. England striker Wayne Rooney was trying to drop in to prevent Pirlo from controlling the game but he wasn’t effective because that’s not really his game.

Although Pirlo was outstanding England allowed him the space to operate and create. The Juventus midfielder had been an influence in previous games for Italy at Euro 2012 but he wasn’t  allowed such time and space by previous opponents.

England boss Roy Hodgson is an advocate of playing the old fashion 4-4-2 formation. Unfortunately it’s slightly dated in modern international football. The way he has set his teams out at this tournament has been very rigid.

The rigidity of the team has helped the side be more organised but it’s hampered any chance of success going forward. Most top football teams have a fluidity in their team that allows the players to be more flexible.

Hodgson’s preferred formation allows players that play in-between the lines, such as Andrea Pirlo space to work their magic.

Despite my criticism of the team, Roy Hodgson has made a decent start as England manager. The veteran boss was only installed a few weeks before the tournament started and under the circumstances he did well.

However, if he is going to be a successful England boss then he will need to change the way England play. Hodgson encouraged passing football at Fulham and West Brom. I hope that he manages to change the teams style of play.

England are miles behind their European rivals and as this summer proves there is plenty of work ahead of Hodgson and his coaches to make England an effective tournament team. Good luck Roy, you’re going to need it.

Have England had a successful European Championships?

Okay, David, first thing’s first: “Football is a simple game. But the hardest thing is to play simple football.” -Johan Cruyff. The problem is that England’s players can play the possession game at club level, but for whatever reason (which I’m sure is not their fault) they can’t do it at national team level. I think the problem lies at club level. Here’s why: A lot of people seem to think that the English game has become crowded with foreigners. Frankly, that’s how it should be, and EPL club fans typically want an exciting league. EPL teams buy some of… Read more »

Some good points there Brad. Very few top class English players have played football in other major leagues in recent years. The likes of Michael Owen and David Beckham moving to Real Madrid was the exception to the rule. I think your right it would benefit English players if they played in other major European leagues.