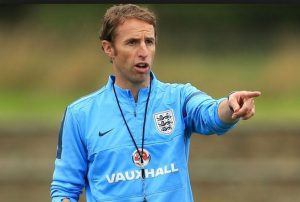 Southgate to be made interim manager / Image via gazettelive.co.uk

The Three Lions have ended another international campaign in utter disappointment and the FA will now start their search for the new head coach as England set sights on the beginning of the new cycle.

With FIFA World Cup qualifiers just around the corner, the governing body will need to react swiftly and according to BBC Sport one name has already been pinpointed as a possible interim candidate.

Gareth Southgate appears to be at the top of the list of names with betting odds slashed to 6/4 on his appointment as FA is prepared to hire former manager of the England Under-21 team until a permanent solution has been found.

And as the FA begins their hunt, English football community has already started debating about possible Hodgson replacements with a particular focus being placed on the nationality of Roy’s successor.

Should England go for foreign or domestic manager?

Having seen their spells with Sven-Goran Eriksson and most recently with Fabio Capello end in disappointment, the tide inclining towards the home talent is getting a full swing with several names already being thrown into the mix.

Immediately after Hodgson’s announcement former England and Newcastle United striker and legend Alan Shearer has thrown his hat into the ring announcing his desire to succeed Roy Hodgson at the helm.

Shearer revealed that he held talks with FA a couple of years ago, but was not chosen then due to his lack of experience. Alan Shearer believes he has a lot to offer with his playing experience and tournament experience as former England striker won 63 caps for his country from 1992 to 200, scoring 30 goals during that time.

There is no doubt that Shearer would be a good addition to the coaching staff but putting him in the hot seat would most likely turn out to be a wrong move as legendary striker still lacks managerial experience five years after his initial talks with the FA.

In addition to Alan Shearer there is also one man who has never hidden his desire to take charge of his country.

Sunderland manager Sam Allardyce has been touted as possible successor to Roy Hodgson and Big Sam was close to being given the role in 2006, when he ended up being overlooked when the Football Association opted to appoint Steve McLaren instead.

Despite his vast experience and a record of being success pretty much at every club he has managed, Sam Allardyce might have seen his time come and gone. Allardyce is a manager players love to fight for, but he retains a reputation for ugly football which – as undeserved as it can be – is not a welcomed note is his portfolio.

Two more English names have appeared on the surface and are expected to be taken into consideration for England job.

Crystal Palace manager Alan Pardew and Bournemouth boss Eddie Howe have also been mentioned as possible solutions and all of these names have their pros and cons as they get assessed for the job.

Howe is considered one of the brightest prospects in the country, but his experience is limited to Bournmouth and his appointment would be a huge gamble. Allardyce will have similar key points stacked against him as he has never managed a top five club.

England’s choices seem to be limited to domestic solutions which would bring quality, but at the same time lack experience at the international stage. Understanding of the team’s atmosphere, fluency and dynamics is an important aspect of the job home manager would do the best, but with their hands tied the FA might still be forced to look outside of the country’s borders.

Plenty of foreign talent has already been taken, but one name in particular has stood out as a possible solution.

Rafa Benitez should be ruled out of the equation straight away as he is still more interested in club management, but Garry Carragher made an interesting suggestion that is likely to entice the governing body.

The USA manager Jurgen Klinsmann seems to be a perfect fit for the job.

German tactician has guided the US team to a semi-final berth at the Copa America Centenario and has a good understanding of the game at the international level that would certainly help England.

He might not be the most fashionable choice, but his huge experience both as a player and manager could play a part. Klinsmann has been to a World Cup semi-final with Germany and Carragher believes he could be a man to get the best out of England’s talented young squad that needs proper guidance to realise its full potential.

And I agree. Do you?