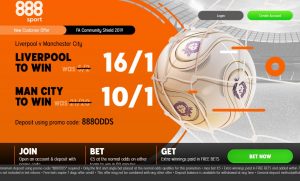 The weekend will see the 111th instalment of the FA Community Shield which marks the official beginning of the new season.

With Manchester City picking up all three domestic titles last season, this year’s edition of the competition pits Premier League winners against the top-flight’s runners-up.

Liverpool have recorded a mixed set of results this summer, having lost 3 of their last 7 preparation matches. The 3-1 win over Lyon lifted the spirits, especially since Reds now have their top stars – such as Alisson, Salah and Firmino – back with the squad.

On the other side, Manchester City picked up where they left off and enjoyed quite a successful preseason. With only two defeats in their last 15 matches, the Citizens have been installed as favourites to win.

888Sport has offered great incentive for all new players who want to wager on this particular match. By signing up through this link and making a €10 minimum deposit using promo code 888ODDS, you can get 16/1 on Liverpool and 10/1 on Manchester City.