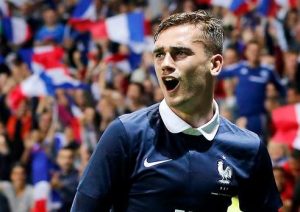 Best player of the tournament so far? / Image via theworldgame.sbs.com.au

France put in a memorable display to deny the 2014 World Champions who go home empty-handed and disappointed over what will be considered a Euro 2016 failure for the German nation.

Following an exciting match in Marseille here are the five things we learned:

France were pressed hard in the opening stages of the match as Germany exerted heavy pressure to Euro 2016 hosts, but Didier Deschamps’ men responded in adequate manner by scoring a late first-half goal to put a serious dent in Germany’s ambitions.

France opened the scoring when Bastian Schweinsteiger was penalised for a handball in the box with Antoine Griezmann executing a strong penalty to put the ball past Manuel Neuer, sending Germany goalkeeper the wrong way from the penalty spot.

Atletico Madrid man sealed the victory 20 minutes from time when he latched on the ball from close range to pick up the ball after Neuer spilled Paul Pogba’s cross into the box.

It was a cold shower for Germany who attempted to get back in the game and had a couple of chances, but Hugo Lloris did great on several occasions to keep his net still.

In the end, a better team won with France becoming the first host nation to reach Euro final twice following the 1984 success.

Die Mannschaft have lost eight matches and drawn four since their 2014 World Cup success which serves as a proof that Germany lost the momentum and got out of their usual clinical form over the last two-year period.

Plenty has changed for Joachim Low’s team with several key members going into international retirement, but Germany were always expected to be contenders at the European stage.

Their semi-final exit can be considered a failure for the football-hungry nation and a major warning sign following Germany’s four lost semi-finals in last six major tournaments.

Low’s men have some soul searching to do in the aftermath of Euro 2016 exit with their problems in the striking department likely to be the man focus for any debate back home.

Mario Gomez scored twice in four games, but his absence was sorely missed in Germany’s team.

The experienced hitman remains the only natural striker in Low’s team and his presence on the pitch would have put much needed pressure on France back line. Without Gomez, France defence had no problems containing Thomas Muller, limiting his influence by pushing him further towards the centre line.

Germany lacked a target man in attack as Julian Draxler failed to fill in the role of a false nine and was never a cutting edge Die Mannschaft needed so badly.

Les Bleus deserved to grab their place in the finals as they have perhaps been the most consistent team so far.

Impressive attack-oriented team consisting of several world-class stars such as Paul Pogba and Antoine Griezmann, was also a team in which an important part en route to the final was played by a couple of late bloomers who deserve special praise.

Laurent Koscielny, Dimitri Payet and N’Golo Kante in particular were a major force in Deschamps’ team reaching their full potential at the international level without having previously being members of the academy and youth set-up.

Leicester star N’Golo Kante chose to represent France just months before Euro 2016 began and his contribution in the team he hardly knew before the continental championship has been immense.

Griezmann should be tournament’s MVP

Antoine Griezmann has maintained the fantastic level of his performances throught the entire competition and Atletico Madrid striker stepped up the plate when it was most needed to help his team reach the final with his brace against Germany.

Griezmann was the constant threat to Germany back line and his goals are just a worthy reward for his incredible form and displays.

With his six goals in the tournament so far, Griezmann has exceeded Zinedine Zidane’s tally at the European Championship finals and equalled Thierry Henry’s record scoring as many goals for France at the Euros as former Arsenal legend.

There is no denying that France forward should be considered the main candidate for the MVP award.