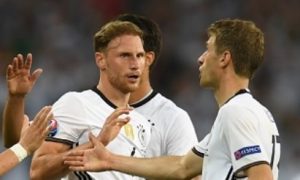 Euro 2016 witnessed a mammoth game in the quarter-finals as 2014 World Cup winners Germany locked horns with Euro 2012 finalists Italy in what has been the 34th meeting between two sides.

Germany have never beaten Italy at a major tournament before and tonight’s game was a highly anticipated event which for the most part failed to meet the expectations.

Both managers fielded matching formations tonight with Joachim Loew deciding to rival Antonio Conte with three men in the heart of defence. Benedikt Howedes replaces Julian Draxler, which allowed Loew to start with Howedes, Boateng and Hummels in the back with Jonas Hector and Joshua Kimmich as wing-backs.

Germany manager showed great courage to shift his team and execute a change in formation, which perhaps took Italy by surprise.

Having made eight changes to his line-up for the final group game with Ireland, Antonio Conte returned to his usual selection and opted not to deviate from his proven system. Chiellini, Bonucci and Barzagli once again started at the back, with Pelle and Eder leading the line up front.

First half was opened with Germany playing possession football during the early stages in Bordeaux, passing and probing in a fascinating tactical battle that was at display for the opening 15 minutes.

Despite dominant play from Loew’s team, it was Italy who made a first chance in the game with Florenzi testing Manuel Neuer cutting inside past two defenders. A comfortable save from Bayern Munich and no real danger to Germany goal.

Germany replied with a half-chance from Mario Gomez, who made a great run to meet a sweeping pass from Kross, but Buffon was spot on to pick up the ball.

Loew’s men have had a goal disallowed near the half-hour mark when Bastian Schweinsteiger met a cross from Muller, but the Manchester United midfielder is adjudged to have pushed De Sciglio before slotting home past Buffon.

Germany stepped on the pedal in the closing stages of the first half creating two great chances through Gomez and Muller, but there was no changes to the score line.

Italy replied almost immediately as Giaccherini pushed a smart cross towards Eder inside the box, before Germans cleared the ball to Sturaro whose effort deflected of the post.

Second half continued in the same manner first part of the game ended, with both teams picking up the pace in the game.

Mario Gomez and Thomas Muller were quite unlucky to score in the normal time and they almost did get on the score sheet ten minutes inside the second half when Gomez set up Muller inside the box for a wonderful shot towards the goal, but Florenzi made a flying block to deny Germany.

Germany finally caught a break after 63 minutes as Mesut Ozil fired from close range after Hector’s deflected low cross met the Arsenal man for a breakthrough in the game.

Loew’s men continued to push forward and Gomez had a great chance to double the lead when Buffon tipped his heel over the crossbar with a wonderful save to a wonderful attempt.

Italy refused to go down without a fight and found their way to get back into the game with less than 15 minutes from time. Boateng handled the ball inside the box and Azzurri were awarded a penalty after a reckless move from Germany defender.

Leonardo Bonucci produced an ice cold finish from the spot and there was nothing Manuel Neuer could have done.

Italy regained confidence following their equalizer and started to push forward with Pelle and De Sciglio coming close to scoring in the closing stages of the regular time, but there were no changes to the score and the game headed into extra-time.

Germany substitution Julian Draxler had a great run down the centre of the pitch before setting up Muller with a too strong pass which got to Bastian Schweinsteiger, who fired over the crossbar from distance. Germany were really trying to end this game before the penalty shootout as they continued to push Italy back to their own half, but disciple defending held on until the end and the game was solved after penalties.

Some call it luck, some call it experience, composure and focus. Either way, Germany had more of whatever they needed to get into the Euro 2016 semi-finals as they managed to dispatch Italy after nine rounds of the penalty shootout. It was Hector who won it for Germany, as Neuer did his part in denying Darmian at the crucial moment of the series.