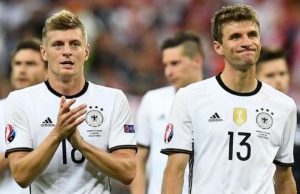 Where did it all go wrong for Germany? / Image via telegraph.co.uk

Far from being the kind of analysis often used in manufacturing industry or any other branch of industrial universe, the following analysis is a simple effort to understand reasons behind Germany’s disappointing 2016 European Championship campaign.

Germany saw their Euro 2016 path end in the semi-final which according to German football standards should be considered a disappointment and a failure.

In all fairness, such a result for the World Cup holders really is an underwhelming achievement that requires serious soul searching and analysis through different levels.

Several key points can be outlined from the football fans’ point of view, although a Germany’s more radical tide has offered an alternative explanation that will also be included in this article.

Starting from the obvious, German national team that went through the Euro 2016 qualifying and performed at the final showpiece was different to the one which lifted the World Cup trophy in Brazil two years ago.

Left back Philipp Lahm, central defender Per Mertesacker and record goal-scorer Miroslav Klose have all decided to retire from international football following the 2014 success which left a huge gap in this side’s quality and dynamics which was evident straight from the start of the qualifying campaign.

Germany lost eight matches and drew additional four since their 2014 World Cup win which is quite an unusual record for a clinical side such as Germany.

Joachim Low opted to replace the retired veterans with less than obscure Cologne defender Jonas Hector, Mats Humels and Jerome Boateng, who all had their ups and downs deputising for the proven footballer who occupied their place in the team just two years ago.

However, Miroslav Klose’s absence proved to be costly for Die Mannschaft.

As Thomas Muller could not be considered your regular No 9 and a classic striker, Joachim Low turned to Mario Gomez, an experienced forward with a fantastic season with Besiktas behind him.

The 30-year-old striker missed the 2014 World Cup campaign due to his injury-stricken form, but he announced himself as a solution to attacking problems with goals against Northern Ireland and Slovakia.

Unfortunately, Besiktas striker suffered torn muscle fibres in his right thigh as he carved out Mesut Ozil’s goals in the quarter-final against Italy and was ruled out of the competition at the worst moment possible.

Germany struggles in front of goal for the majority of the tournament and Mario Gomez’s absence from the match against hosts France in the semi-final might have been one of the biggest reasons behind a 2-0 defeat.

Die Mannschaft’s only striker Thomas Muller was being left isolated, while ‘false nine’ Julian Draxler did little to achieve what Joachim Low had initially planned.

His runs between the lines did cause some problems for France defence during the stage of Germany’s dominance, but it all counted for nothing following Schweinsteiger’s handball which turned the entire game upside down.

Ultimately, usually ruthless and clinical Germany were thrown out of pace at the Euro 2016 with its toothless and impotent forward line proving to be the weakest link in the entire team.

However, it wasn’t the inexperience of one Hector and Kimmich that cost Germany their place in the final. Quite the contrary.

Team’s captain Bastian Schweinsteiger was there to compensate for the lack of it, but Manchester United midfielder’s experience counted for nothing as the 31-year-old star turned to be a villain in Germany’s dominating loss to tournament’s hosts.

Schweinsteiger’s handball and Neuer’s misjudgement proved to be two main glitches in the usually well-oiled machine, which ran out of steam at the crucial point.

Germany’s loss sparked outrage back in the homeland with a leader of Germany’s right-wing populist AfD party Beatrix von Storch suggesting that Die Mannschaft could have beaten France with fewer non-white players.

Riidiculousness of such a claim was best seen through the French point of view, as Les Bleus head into the final with the betting odds of 21/20 to beat Portugal with their multicultural side.

With a twitter post which was seen as a jibe towards players with immigrant roots, Beatrix von Storch caused a storm of protest on the social network with the comments being labelled as pure stupidity for what they truly are.

Nevertheless, such radical comments demands attention as they can serve as a warning sign for the entire country that will be looking to bounce back to the international stage as soon as possible.

What is your explanation of the Germany’s Euro 2016 failure?