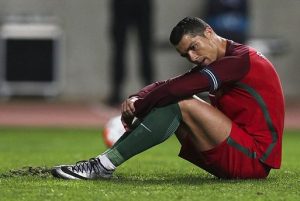 Is Ronaldo entirely to blame for Portugal’s poor performances? / Image via dailymail.co.uk

Ever since he stepped on the brightest football scene as an 18-year-old boy wearing a Saturday Swapshop style jumper following his £12 million Manchester United move from Sporting Lisbon, Portugal star Cristiano Ronaldo has been polarizing the world football arguably like no player before.

Thirteen years down the line and at the Euro 2016 European Championship, now a Real Madrid star is stirring the pot once again with his displays and public comments in France.

He is everyone’s favourite bad guy, but do we have the right to hate – or love him for that matter – so passionately, judging his every move and scrutinising his every step of the way?

With Portugal having added a stalemate against Austria to the frustrating draw against Iceland at the opening of the Euro 2016, Cristiano Ronaldo has once again been singled out from the crowd, taking all the blame for his national team’s failure to deliver and meet the expectations.

Real Madrid star may be a leader, but he is a technical one though. Cristiano Ronaldo has always been one to set standards with his tireless efforts and dominant performances, but he has never been a true charismatic, personality leader as his individualism often created huge teammate problems.

However, Portugal star boasts a more tender side to his character, one that was on display against Austria and Iceland as well.

One fortunate Portugal fan will confirm it as he was treated by a selfie with compassionate Cristiano Ronaldo, who prevented match security members from manhandling this pitch invader. Knowing that Portugal would be fined for this intrusion, Cristiano Ronaldo still waited patiently as this (un)fortunate fan calmed his trembling hands to take a photo of his idol.

A couple of days before, Cristiano Ronaldo raised a couple of eyebrows with two lines shaved in his hair for a match against Iceland.

Those who judged him were forced to bow their head in shame as Cristiano Ronaldo used the occasion and this little detail to show solidarity with a sick child. According to reports, Real Madrid star paid for the medical treatment of a young boy sick with cancer in Portugal and that this move was his way of raising awareness for the sickness itself.

This wasn’t the first time Cristiano Ronaldo used his hair style to conveniently mix fashion with a good cause.

Back in 2014 Cristiano Ronaldo shaved his head in zig-zag pattern on the side against the USA with the design mirroring the brain surgery scars. Portugal superstar paid £50,000 fee for a Spanish child’s surgery and his 2014 World Cup hairdo was supposed to show solidarity with illness.

Using generally groundless hate towards the Portugal side to judge his Euro 2016 performances – even with that missed penalty against Austria included providing plenty of grounds for doing so – can be a bit unfounded to make conclusions on his influence in Portugal’s play.

His ironic grim in the 78th minute of the game against Austria when the ball hit the base of the left hand post was meant to send a careless message, but it revealed much more than what Ronaldo intended. Seemingly uncaring, Cristiano Ronaldo was disappointed more than any of the fans that still hold this miss against him.

Having narrowed the lines between defence and midfield to reduce space for Ronaldo to develop his game, Austria displayed excellent tactics to deny Portugal’s main threat, but it was Fernando Santos’ other men who have failed to step up to the plate to help their teammate.

Having pushed former Manchester United winger Nani away from the spot to take the penalty, Ronaldo embraces responsibility, as much as this convenient occasion went hand in hand with his selfish desire for self-promotion.

Ronaldo is responsible for the penalty miss bud the burden of a toothless draw goes beyond Portugal’s main man and onto the players, who will need to pick up their game in order to help Portugal achieve a win in the last round of the group stage.

Portugal are due to face Hungary on Wednesday in make it or break it fixture as Portugal are looking for three points against group F leaders. Cristiano Ronaldo and co. are given the odds of 2/5 to claim a win that would be enough to propel them to the top of the standings despite the opening disappointments.

Can they pick up the pieces to win much needed three points?