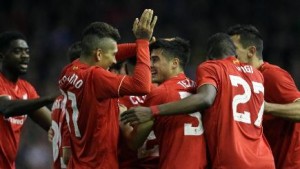 Liverpool secured their first win under new manager Jurgen Klopp on Wednesday night, against Bournemouth in the Capital One Cup at Anfield.

Having notched three straight draws since Klopp’s arrival to England, the Reds finally broke the duck in a League Cup game which will be a huge morale boost ahead of the Premier League derby against Chelsea next weekend.

Liverpool featured three full debuts in a much changed line up. Jurgen Klopp has made as many as nine changes to his team with six youngest players on the pitch, most notably the 19-year-old Cameron Brannagan in midfield and 20-year-old Connor Randall at right back.

However, it was the full debut of Joao Carlos Teixeira that earned the plaudits from the Anfield faithful. The young Portuguese was the most outstanding performer in the first period of the game, creating the best chance of the game which lead to Clyne’s goal after 17 minutes of play.

The summer arrival from Brighton successfully broke the offside trap and picked up another excellent performer Firmino’s fantastic through ball, but his wonderful back heel effort was cleared from Bournemouth’s goal line by defender Adam Smith. However, it didn’t go far as Nathaniel Clyne picked it up to give Liverpool an early lead and the German manager a reason to celebrate in his unique manner.

The visitors didn’t allow the early goal to break their concentration, as they proved to be no pushovers against the youthful Liverpool squad. Mark Pugh was a real threat on the left, and was the most distinguished performer in the visiting team alongside Junior Stanislas who had the best chance of scoring when he tested Adam Bogdan with a fine shot on target early in the game.

The Hungarian challenged Bogdan once again in the first half when his close-range header was turned away by the Liverpool shot stopper, and he had another fine chance with a free kick which went near off the post.

An openly contested affair was seen in the first half with Roberto Firmino and Jordon Ibe looking most threatening for the home team.

The pace was a bit slower in the second half with not that many clear cut chances on both sides of the pitch. Liverpool were in control of the possession looking sure to come on top in this League Cup encounter keeping the visiting side well at arm’s length for much of the game.

Bournemouth have done little in twenty minutes after the interval, and it was a little quiet at Anfield before the hosts threatened from a couple of well executed free kicks. Lucas Leiva tried his luck and burned the palms of Federici, before Teixeira fired another fine shot which was also blocked by Bournemouth keeper.

Last ten minute of the game have seen Liverpool press in the final third with some fine passing between Origi and Lucas on the right, but the Liverpool striker was yet again off target.

Roberto Firmino has impressed in tonight’s game and the Brazilian was given a standing ovation by the home fans as he was replaced by Adam Lallana in the final moments of the game.

At the end, one goal to separate the two sides and give Liverpool a passage through to last eight of the Capital One Cup, and the first win for the newly appointed manager Jurgen Klopp. Much needed and awaited triumph will be a huge boost for the team ahead of the important Premier League duel against Chelsea.

It is not all good news for Liverpool fans though as captain Kolo Toure was forced off with a suspected hamstring injury, having been replaced early in the game by Martin Skrtel. The experienced defender will undergo further tests to determine the extent of his injury.

Aitor Karanka’s men were tough to break, as Manchester United had to work overtime and were denied in their attempts to survive the fourth round Capital One Cup match on Wednesday evening.

Boro had the best defensive record in the Championship last season and for good reason too, as Manchester United players were impotent to break the deadlock during the 90 minutes of the game.

The Championship side even had Daley Blind own goal ruled out for offiside and they showed no fear against Louis van Gaal’s men.

Final stages of the regular time brought a couple of chances at both ends with Marouane Fellaini and Jesse Lingard with a great opportunity to give United a lead and a win for sure, while the guests tried through Downing whose fine volley was beaten away by Romero.

Both teams got more than what they’ve bargained for, as they headed into an extra 30 minutes of play. United continued slowly, with Fellaini as the target man upfront and most of the balls being targeted towards the Belgian and no real threats for the visitors who have been more cohesive throughout the proceedings.

The introduction of Anthony Martial changed the pace of the game as the young French had the great chance in the final stages of extra time, along with another one from Pereira, but the winners had to be decided after the penalty shootout.

Rooney, Carrick and Ashley Young have all missed for the home side, to give Middlesbrough a spot in the last eight and join the likes of Arsenal and Chelsea who have also crashed out of the competition.

Other results this evening