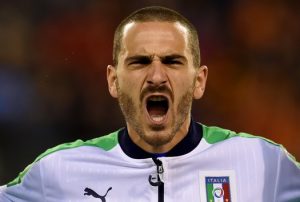 Italian defender might be the type of a guy you will not notice while watching Juventus and Italy, especially in the corners of your TV screens, but the 28-year-old centre-back is the force to be reckoned with, the impenetrable wall every goalkeeper – in both cases Gianluigi Buffon – feels safe and secure behind.

Best of the best

When a manager such as Pep Guardiola calls you one of his “favourite ever players”, you know you’re on to something good.

Following Juventus’ 2-2 Champions League draw at home to Bayern Munich in the first leg of the competition’s last-16 two-legged tie the Spaniard heaped praise on the Italian defender hailing his heroics against the Bavarians.

Inter Milan must be kicking themselves at the moment for rejecting the versatile defender who came through the ranks at Viterbese before Nerazzurri bought him in 2005. Italian defender was paid only £30,000 and has featured just four time for Inter before his Serie B spells at Treviso and Pisa.

Four years following his arrival, Bonucci left in what has since then been a blatant misjudgement by Inter Milan.

Masters of finding a gem of a player, Juventus have turned Leonardo Bonucci into one of their central figures, a player who played a major part in Old Lady’s domestic domination going on to become one of the best Italian players along the way.

A soldier in Conte’s service, Bonucci has become a stoic defender both for Juventus and Italy. Physically and mentally dominant, Bonucci took his strength off the football pitch and into the streets with the example from 2012 serving as definite proof of his undeterred nature.

Strolling down the streets of Turin with his wife and son, Leonardo Bonucci was faced by an armed robber asking him to surrender his watch. Instead of agreeing to assailant’s requests the Italian defender punched the masked man in the face, knocking him cold to the floor.

His brave actions reflect the kind of nature he nurtures on the pitch, the kind that was at display during Italy’s opening Euro 2016 match against Belgium.

Described as the worst Italy squad in recent history, Antonio Conte’s men did great to prove their doubters wrong by securing a comfortable 2-0 win over one of tournament’s title favourites.  With Leonardo Bonucci in the heart of Conte’s three-man defence, Azzurri put in a jaw-dropping performance with world-famous Italian defending taking centre stage in the match.

Flawless with his clearances and man-marking, the 28-year-old defender held Belgium strikers in his pocket together with Andrea Barzagli and Giorgio Chiellini.

Bonucci produced brilliant vision and creativity when he made the superb pass forward to tie Emanuele Giaccherini for Italy’s opening goal. Lying deep at the centre of the pitch Juventus defender displayed formidable accuracy and ability to read the game sending the ball behind Beligum’s defence and into the Courtois’ box completely taking the opposing team by surprise.

Italy defender has always enjoyed having the ball at his feet admitting he “loved to dribble past opponents with a dummy” when he was younger.

Bonucci’s heroics against Belgium have propelled Italy with Antonio Conte’s men now looking at the odds of 10/1 to lift the trophy in France.

There is a long road ahead of them but their start in the “Group of Death” is more than promising.

All in all, doubting the Italians was a foolish thing to do. With the kind of a spirit displayed by Leonardo Bonucci and all of Italy’s squad members starting from the instant they sang their hearts out during the anthem to the moment Gianluigi Buffon ran across the pitch to swing and fall from the crossbar as part of his celebration after the game, Antonio Conte’s men cannot be discredited.