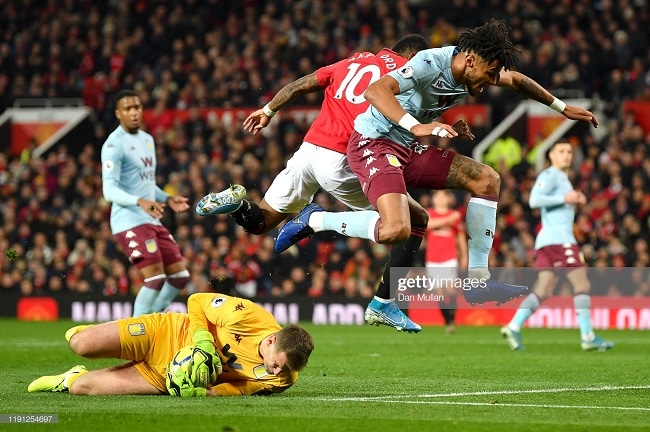 Manchester United welcomed Aston Villa at Old Trafford for one of the closing games of the 14th round of this season’s Premier League roller coaster.

The Red Devils entered the match from the 11th place after the results on Saturday, hoping to climb back up all the way to sixth with a win here. On the other hand, the newly promoted visitors were sitting in 16th, only two points above the relegation zone.

United boss Ole Gunnar Solskjaer rested his entire team in the Europa League defeat to Astana on Thursday, keeping them fresh for this game. However, Paul Pogba, who is now close to being fit, was still missing. Scott McTominay was back having recovered from an ankle problem.

David De Gea was in goal. Harry Maguire paired up with Victor Lindelof in the heart of defence, flanked by Brandon Williams and Aaron Wan-Bissaka. Fred and Andreas Pereira played as the double pivot in a 4-2-3-1 shape, with Juan Mata playing further up in the number 10 role. Marcus Rashford and Daniel James played on the wings, with Anthony Martial the lone striker.

Dean Smith, who recently signed a new contract with Aston Villa, had Bjorn Engels at his disposal again with the defender back from a hip injury. Midfielder Jota was still absent, working on match fitness after a hernia surgery.

Tom Heaton stood between the posts. Tyrone Mings and Ezri Konsa formed the centre-back partnership, with Matt Target on their left and Frederic Guilbert on the right. Douglas Luiz was tasked with providing cover for the back four, with John McGinn and Conor Hourihane in advanced midfield roles. Anwar El Ghazi and Jack Grealish supported Wesley in attack.

The game started in a relatively lively fashion as the ball moved from one end of the pitch to the other. One of the first things of note was that Maguire was having an unusually difficult time with the pace of El Ghazi and Wesley, and he picked up a yellow card in the seventh minute for grabbing the Dutch winger from behind. On the other hand, the pace of James and Rashford was also proving a tough thing to deal with for the Villa defenders.

It seemed only a matter of time and the question of which team would first make one of their dangerous attacks count, and it turned out to be the visitors. Minute 11 was running when Grealish managed to isolate Pereira one-on-one on the left flank, and cutting slightly inside, whipped in a fantastic curved ball from a tight angle straight into the far top corner, leaving De Gea stunned where he stood. A great goal.

The first problem for Smith arose in the 17th minute when El Ghazi had to go off injured, due to sliding awkwardly while putting in a cross from the right. Mahmoud Hassan, better known as Trezeguet, came on.

United looked quite well in terms of attacking ideas. They were trying to hit Villa from both flanks and through the middle, but having gone a goal down they were now dealing with a very low block, very hard to break through. Martial managed to hit one low towards the near post from a tight angle in the 21st minute, but Heaton was for up to the task.

But Villa looked dangerous both on counterattacks and set-pieces, and in the 29th minute they managed to put the ball in the net again as Wan-Bissaka hesitated and enabled Grealish on the left to snatch the ball and take it into the six yards. The goalscorer pulled it across,Wesley got involved and eventually Trezeguet slammed it in from close range, but the linesman’s flag was raised for offside – a decision confirmed by VAR.

United had a good chance in the 35th minute as Fred slipped in a cunning through-pass for Rashford, but Mings managed to slow the forward down enough for Heaton to come and claim it. The home team really pushed forward as hard as they could, but they weren’t succeeding in breaking through the Villa lines quickly enough, and they looked vulnerable on the counterattack.

But in the 42nd minute, the score was level. United took a corner short before Pereira swung in a cross which found Rashford completely unmarked inside the six-yard box. The England international appeared to have scored from there at first, but his header actually hit the post and bounced off the back of Heaton before going in.

The scoreline looked better from United’s point of view at that moment, but it changed absolutely nothing in terms of what was happening on the pitch. If anything, it made the visitors exude even more energy and even push the hosts back for a while. In that period, Grealish took a shot which got deflected wide, before Trezeguet let a rocket fly from range and hit the woodwork.

There was a moment of questionable refereeing from Craig Pawson in the last minute of injury time as he pulled the play back for a foul by Guilberto on Williams and booked the Villa fullback. The thing is, James was charging free into the box when Pawson’s whistle sounded.

Aston Villa players showed a strong desire to go out and win this game early in the second half. For several minutes pressed high, forced United players into mistakes and won possession in the opposition half, but in the end, they couldn’t seriously threaten De Gea. After five minutes or so, Solskjaer’s men finally shook off the pressure and went forward themselves, but they couldn’t do anything of note either.

The flow of the game was very much the same as in the first half at this point with both teams looking to attack and both defences busy, and it again looked a matter of time before one side found a breakthrough. In the 58th minute, Martial danced past several opponents inside the box and took a shot from close range, prompting a good save from Heaton. Then Mata did something similar but went down looking for a penalty, which the referee was never going to give.

With an hour gone, United were slowly getting a firmer grip on things, but once they reached the final third their passing became erratic and they were still having problems with the threat of counterattacks. Villa had a great chance in the 63rd minute as Trezeguet’s deflected shot fell kindly for Grealish, but Grealish completely misfit the ball and then his team were punished.

A cross came in from the right. Wesley tried to clear but only managed to flick it on, setting up Lindelof at the far post. The centre-back calmly headed in from close range.

But straight away, Villa pulled back level. A clever chip by Targett and a smart run by Mings  fooled United’s offside trap and the centre-back slammed a volley into the net from seven or eight yards. It was a great way to round off an excellent performance for the Villa defender.

In the 74th minute, Solskjaer freshened his team up a bit by withdrawing a tired-looking Mata, whose inlfuence on the game had diminished greatly in the second half, and sending on Jesse Lingard instead. Four minutes later, Williams made way for Luke Shaw, but just before that, Martial had a great chance to put his team back ahead. Fred brought the ball into the box and lost his footing, but Martial picked it up and after a desperate scramble, he tried to lift it over Heaton from three or four yards but ended up lifting it over the bar as well.

With 10 minutes to go, it was Smith’s turn to make his second substitution as he replaced Hourihane with Henri Lansbury. Solskjaer’s last throw of the dice was to bring on Mason Greenwood instead of Martial, and then United had another good chance. James found the head of Fred with a good cross, but the Brazilian practically placed it into the arms of a grateful Heaton, unaware of the run of Lingard who could have perhaps done more with it.

Still, unperturbed by the wasted opportunity, United charged forward more decisively in the last five minutes. Maguire came close as a corner found him on the far post, but not only did Mings clear his header off the line, but the referee also signaled that Maguire had fouled his marker.

But as time slowly dripped through their fingers, their attacks became less dangerous and though they mostly dominated the four minutes of stoppage time, they couldn’t find the winning goal.

The final score of 2-2 fits the football seen in this game very well. Both teams mostly played in an attacking fashion, they alternated in holding the initiative, and both looked very capable of scoring quite suddenly.

Aston Villa will be pleased with everything about this contest. They gave a good account of themselves at a tough place to visit. They played their own brand of football, and though they didn’t create many chances, they scored twice and avoided defeat.

On the other hand, Solskjaer will likely see the game as two points dropped rather than a point gained. Yes, Villa played well according to their standards, but a club the size of Manchester United will be disappointed with failing to beat a newly promoted side at home. Things aren’t going any better for them than they were under any other manager since Sir Alex Ferguson retired in 2013, and Solskjaer is the fourth in that line. Whether by dipping into the transfer market or rearranging the existing team, the Norwegian will simply have to find a way of winning games like these and moving back up the ladder, or risk going the same way as David Moyes, Louis van Gaal and Jose Mourinho.

Aston Villa are now 15th in the Premier League table, and their quest for a number of points sufficient for survival continues when they travel to London to face Chelsea on Wednesday. United are ninth and will welcome Tottenham Hotspur, led by their former boss Mourinho, also on Wednesday.

Vesko is a football writer that likes to observe the game for what it is, focusing on teams, players and their roles, formations, tactics, rather than stats. He follows the English Premier League closely, Liverpool FC in particular. His articles have been published on four different football blogs.