Nolito: Would return to Barcelona be a mistake for Celta star? 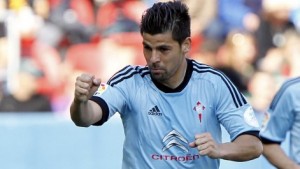 Impressively consistent performed in Spanish La Liga at the moment, this 29-year-old has come a long way from his boyhood club Sanluenqueno and Barcelona where he arrived at nearly 22 years of age.

Not to be regarded as your typical La Masia product, Nolito is a proof that hard work does pay off.

The Catalan club had no patience to wait for Nolito.

Unnoticed in an endless streak of attacking players in their ranks and after only two league games for Barcelona, the Spanish forward was transferred to Benfica in 2011. Two years, 35 matches for the Portuguese club later, and a loan spell at Granada sandwiched in between, Celta came knocking on the door.

Current campaign has been particularly inspiring as Nolito has been instrumental to Celta’s undefeated run to the top of the standings. He helped his team with six goals in eight matches, assisting three times in the process and putting incredible all-round displays for his team, most notably a fine performance against his former club Barcelona in the fascinating 4-1 win last month.

What are his strengths?

Nolito can play wide left, but can also operate through the middle as a striker and fourteen goals from last season are there to prove it. Celta star has also created 96 chances last season, more than Leo Messi (95) and Cristiano Ronaldo (75) and his influence on the team’s play has been immense.

Hard-working footballer who had been waiting for his turn under the spotlight patiently over the course of past few years has also been rewarded with a place in the Spanish national team and he played a part in Spain’s successful qualifying campaign for Euro 2016.

He featured for 13 minutes in a 4-0 win against Luxembourg and even had time to set up a goal for Santi Casorla, and was given a 75-minute appearance and a starting berth in the 1-0 triumph over Ukraine in Kiev.

Earning a spot in Del Bosque’s team was the priority for Nolito who had last year rejected an offer from Chelsea in order to stick with Celta. Level-headed, humble and driven footballer as he is, Nolito is not easily persuaded by glamour.

“I did lose money when turning the Premier League offer down. I decided it wasn’t the time to leave Celta. Things were going well and I wanted to break into the national team”, recalls Nolito.

Aim(s) accomplished, is it time for Nolito to move on?

Having just turned 29, Nolito is aware he is not getting any younger and could this time have alternate motives for a change of scenery. We are not talking about money, as financial issues are not his priorities when choosing a club.

Barcelona rejected the Spanish star without giving him the time to shine, but are willing to make amends.

Luis Enrique has identified Nolito as the ideal, if not improved, replacement for Pedro. As a footballer with great team ethic and understanding of the game, Nolito is the perfect candidate. An invitation from Barcelona would have a more emotional advantage over the reported offers from Arsenal and Chelsea who are also keen on adding this talented forward to their squad.

Emotions to play a part

Personal angle is also on Barca’s side. Former Celta manager Luis Enrique was the one who orchestrated Nolito’s transfer, convincing the club to pay €2.5 million and take him off the Benfica’s books.

“Luis Enrique has been there for me through thick and thin. He is a person who has always been direct and clear with me. He made me watch football differently. He made my career”, Nolito says of his former coach.

Firmly established in Del Bosque’s Euro 2016 plans and with a €18 million buyout clause in his contract, Nolito will not be in any way sabotaged by his current club who are more than grateful for his dedicated performances and have even tabled a new contract offer in their attempts to persuade Nolito to stay at Balaidos.

Conclusions are easily drawn, Nolito is at the crossroads.

With the January transfer window around the corner, Nolito is adamant. He will not be leaving Celta during winter. He refuses to be drawn into any long-term discussions as he remains focused on helping his team.

“I am not leaving in January. I’m happy in Vigo. God will decide my future”, he said prior to Real Madrid game.

Should Nolito return to Barcelona?