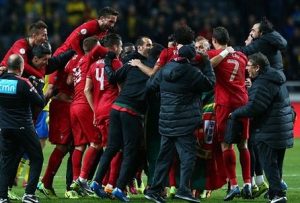 Portugal made history in France / Image via dailymail.co.uk

Final match between Portugal and France saw the host nation embark on a final step of their mission to pick up their third major honour on home soil but fail against Portugal who were bidding for their first ever major trophy.

Two moments, however, took centre stage in this relatively uneventful match for the first 90 minutes in which both teams struggled to go past the pressure of high expectations and treat the anticipating crowd with a more visually appealing performance.

Preparations for the 2016 European Championship finals in Paris took an unexpected turn as swarm of moths descended on the pitch at the Stade de France.

Thousands of moths took it upon their own will to overshadow the final match of the Euro 2016 between Portugal and France, for the normal 90 minutes at least as two nations struggled to make the best of their final appearance of the tournament.

The second match defining moment occurred after 25 minutes when Portugal star Cristiano Ronaldo was forced off the pitch through injury.

Portugal captain was injured in collision with Dimitri Payet in the ninth minute, but his knock was too much for the 31-year-old who was stretchered off the field in tears.

As for the game itself, it started with a couple of chances on both sides of the pitch with Nani trying his shot after five minutes in and Antoine Griezmann whose incredible header was met with Rui Patricio’s flying save to deny the Frenchman.

France got the better of the game during the first half with Sissoko’s wide effort after a powerful run as another noteworthy moment after 20 minutes of play. The same player had another chance ten minutes later but Rui Patricio was well on his mark to stop the shot.

With Quaresma coming on to replace Cristiano Ronaldo the Portugal national team was left distraught after their captain’s knock and without much to boast for during first 45 minutes.

The second term saw an even start with both teams seeing a bit of the ball without any real progress though.

Paul Pogba decided to shake things up in 54th minutes of the game, but the ball flied well over the bar. French team however saw a real moment of action with Kingsley Coman making an immediate impact as he passed the ball to Griezmann for a shot that ended up being an easy save for Rui Patricio.

Atletico Madrid striker failed to use a great chance ten minutes later as he steered his header off target when he was expected to put it in.

Coman was once again in the centre of attention in the 75th minute when he passed the ball to Olivier Giroud, who gets into space and goes for goal, but Portugal managed to defend their goal once again.

The last ten minutes of the game saw both team increase the tempo in order to end the game in 90 minutes but Sissoko’s yet another spectacular shot was met with Rui Patricio, who did great to stop a hammer of a shot.

France had their best chance in the injury time when Gignac scuffed his finish as the ball bounced against the post with the rebound eluding Griezmann by inches.

It was extra time yet again for Portugal who became proper specialists of winning outside the normal 90 minutes.

Fernando Santos’ men have really picked up their pace in extra time, as they tried to put one in through Eder who towered above everyone in the box after Quaresma’s cross, but Lloris pushed it back out.

The Selecao cam inched away from goal with Guerreiro’s free kick curling over the wall and off the bar. A bit of luck for French side and Lloris who was beaten by the fantastic shot. Santos order full attack on tired French lines and their incredible work rate paid off in the closing stage of the match.

A moment of madness on Portugal bench ensued in the 109th minute when Eder made himself a national hero with a brilliant long range low shot into the bottom corner from 25 yards and behind the helpless Lloris.

Just as they got to the final match, the Portuguese win the tournament. Without nothing to show for in regular play, the Selecao managed to win their maiden major trophy without their best player Cristiano Ronaldo and do the Greece all over again.