Portugal 2-0 Wales: Ronaldo and Nani put an end to a historic Euro 2016 run 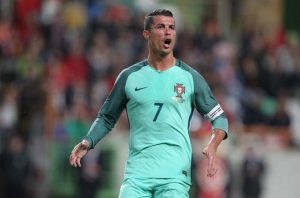 Welsh European dream in their first major tournament appearance after more than 50 years came to an end on Wednesday night in Lyon with Portugal putting in a superb performance to rule out the surprising semi-finalists.

Gareth Bale and his teammates have thus missed their chance to become the first British nation in a final since England’s 1966 World Cup success as they were beaten by two quick-fire goals from Cristiano Ronaldo and new Valencia signing Luis Nani.

It was a historic night for both Wales who saw their fairy-tale run in their first major championships since 1958 come to a halt and Cristiano Ronaldo who equalled Michel Platini’s tally of nine goals at European Championships.

Real Madrid star also became the first player to score three or more goals in two European Championships having done it this year and in 2012.

Ronaldo led his team to victory with a brilliant performance that was rounded by a flying leap and a header that put the ball past Wayne Hennessey after 50 minutes in the game. It was his third goal of the tournament following a brace against Hungary with Real Madrid star’s performances growing as the competition unfolds.

Cristiano failed to find the back of the net against Croatia and Poland, but his strike in Lyon was perhaps the most timely and most needed goal so far as it sparked his team forward against the resilient Welsh Dragons.

The 31-year-old Portugal star has won the battle of Galacticos as he got one in front of his Real Madrid teammate Gareth Bale, who was once again one of the best performers in his team for much of the proceedings.

However, Real Madrid winger failed to make his presence known without the support from Arsenal man Aaron Ramsey, who watched on from the stands as he was suspended after a second booking against Belgium in the 3-1 win in the quarter-finals.

His runs between the lines were missed tonight as Gareth Bale looked quite isolated in the final third without proper support from his teammates.

Joe Allen was left indisposed in midfield having had not one of his better games tonight and Ramsey’s absence was sorely missed in Lyon on Wednesday night.

Welsh go home empty-handed but with full hearts as they won fans and heart with their historic run to the semi-finals.

Their epic adventure was given a warm tribute after the final whistle with Welsh fans singing their hearts out in support for their brave team.

For the first time this tournament Portugal outplayed, outdid and outwitted their rivals during the regular 90 minutes, with their three-minute blitzkrieg stunning the Welsh, derailing them completely.

Cristiano Ronaldo was involved in Portugal’s second goals as well as Real Madrid forward drilled a shot towards the far corner, but Luis Nani’s quick reaction directed the ball to the other side leaving Hennessey helpless.

Luis Nani capped a fine performance with a goal that will be a huge boost ahead of the final. The former Manchester United winger is enjoying a fine championship having already realised a move to Valencia, which will arguably be his chance to get back on the biggest stage with a bang.

Wales were knocked down with two quick goals from Portugal and have rarely threatened a comeback for the remained of the game, despite Gareth Bale’s double effort which prompted two Rui Patricio saves from distance.

In the end a totally deserved win for Portugal who are back in the tournament following a dreary start to the campaign.

Portugal have never won a major tournament and are now waiting to find out if they will be meeting Germany or France in Sunday’s Stade de France Final.