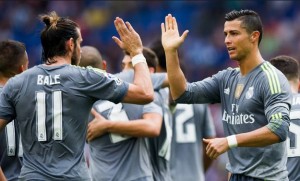 With only one goal standing between the two sides, Real Madrid emerged victorious from their UEFA Champions League semi-final two-legged tie with Manchester City.

Gareth Bale appeared to be scorer of the sole goal at the Wednesday’s match at Santiago Bernaberu, but his deflected shot has been accredited as an own goal by Manchester City’s Fernando. Welshman’s goal drought has thus been extended to 12 Champions League, with former Tottenham man going close to 11 months in the competition.

Setting the scene for the showpiece event in Milano, Real Madrid have nevertheless booked their place in the final match where they will have to face their local rivals – Atletico Madrid.

Champions League final match will provide Zinedine Zidane’s men with an opportunity to record only their second win in their last ten encounters against Atletico Madrid in all competitions and to claim their 11th European title. At the same time, Diego Siomeone’s men will be vying for their first Champions League title.

Having witnessed an underwhelming match of ninety minutes in the match at Santiago Bernabeu, here are the five things we learned:

Portuguese star will go down in history as one of the greatest players that ever lived as well as Real Madrid’s legend.

Cristiano Ronaldo has amassed the total of 93 goals in the UEFA Champions League, thus becoming the competition’s all-time top scorer this season, with one more match in store for Real Madrid star to improve his tally.

He has scored 16 this term already and was determined to increase the number against Manchester City, but his post knock appearance proved that there is more to Real Madrid than just Cristiano Ronaldo, with the game also providing proof that Los Blancos have no reason to worry about their future:

With Cristiano being unable to step u and deliver against Manchester City, all the attention turned to Gareth Bale, whose brilliant run saved Zinedine ZIdane from all the trouble of going into extra time.

The Welshman was so delighted to see the end to his continental drought that has lasted since December 2014 and a game against Ludogorets and we bet he would have been equally disappointed that UEFA deprived him the credit when the goal was accredited to Fernando.

Nevertheless, Bale was once again an imposing presence on the turf, just like in Real Madrid’s last couple of games when he held their heads above the water with his outstanding displays.

The 23-year-old is grabbing the presented opportunity with both hands and will make Zinedine Zidane sweating in dilemma upon Karim Benzema’s return to action.

Real Madrid academy’s pearl, Jese remains one of rare players to have survived the cut with one of his peers Alvaro Morata being the ultimate proof.

True, Jese has thus far in the season played less than 800 minutes before tonight’s match, but Jese did his best to add quality to his team’s performance.

Real Madrid striker had a solid chance to double the lead in the second half which was the highlight moment in his silent, but up to the task performance against Manchester City.

The towering Belgian is becoming more and more susceptible to injuries and has indeed become a liability for Manchester City.

Citizen’s captain limped off the field after only ten minutes in the game with a suspected calf injury that is added to the increasing list of fitness problems that has troubled the Belgium international.

Kompany has most recently spent an entire month on the sidelines with a knee problem, while he struggled with numerous muscle injuries in the earlier stages of the season as well.

All in all, Kompany has been hit with no less than 32 separate injuries since joining Man City from Hamburg in 2008 and perhaps it is about time that Citizens considered replacing their captain with a more reliable option.

It’s been a year of mixed emotions for the Ivory Coast midfielder, who is unlikely to stay past he ongoing season, not with the pendind arrival of Pep Guardiola, the manager who is not up to his own liking.

Yaya Toure returned to action much to the amazement of the Madrid press and was expected to be a power force in City’s midfield, but his influence was limited to lumbering around in the number 10 position, offering little support for Sergio Aguero upfront and to back four behind him, who were left exposed in not few occasions tonight.

Manuel Pellegrini has recognized the lack of will and energy, replacing the Ivorian on the hour mark to round off a disappointing exit from the European competition, Yaya Toure is unlikely to see anytime soon. Not if he goes to Inter anyway.