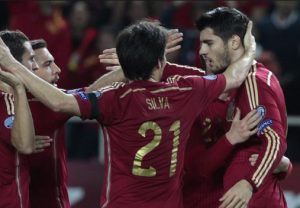 It was a night to forget for Turkey who suffered their second defeat at Euro 2016 to lively Spain who put three goals past Fatih Terim’s team for a comprehensive 3-0 win that sends them to knockout stages of the tournament.

Vicente del Bosque fielded an attack-oriented team with Alvaro Morata as lone striker, changing his usual tactics with a false nine which proved to be a right decision for the Spanish team who looked buoyed and more inspired than it was the case in their Euro 2016 opener against Czech Republic.

The game was opened with a booking for Sergio Ramos who was cautioned for bringing Burak Yilmaz to the ground in the first minute of the match.

Early stages of the match were dominated by Spain who used their passing game to probe in the final third of the pitch, unfortunately without result as Turkish team played with discipline in defence keeping the Spanish players at an arm’s length at the time.

First real chance in the game was recorded after 11 minutes when Jordi Alba produced a wonderful cross into the Turkey box for Alvaro Morata who sent it towards goal, but only for Balta to make contact and divert it against the post and behind goal.

Turks manager to grab a break from Spanish pressure near the half-hour mark when Calhanoglu struck one from outside of the Spain box sending the ball wide of the post. Same player tested his luck minutes later with a free kick in dangerous position following Juanfran’s challenge on Arda Turan. Calhanoglu got closer to scoring this time but there was no change for the score line.

La Roja responded instantly with Nolito and Fabregas getting close to scoring before Alvaro Morata finally broke the deadlock after 35 minutes of play.

Wonderful cross from Nolito was met with Juventus striker inside the area for a beautiful header.

There was no time for break as Spain quickfired their second in the game with Celta Vigo star Nolito recording a goal following an assist minute earlier. Nolito took advantage of a poor header from Topal to place his effort into the bottom corner with a well-controlled volley.

Frustrated with lack of pace and grit during the first 45 minutes, Turkey were determined to improve their showings in the second half, but their attempts were cut short only three minute after the break.

Juventus striker Alvaro Morata continued his excellent form with his second in the game after Andres Iniesta found Jordi Alba with a wonderful pass for Barcelona left-back to send it over to Alvaro Morata for an easy close-range finish.

Morata had a chance to score a hat-trick after being picked out by Silva only couple of minutes later, but his effort went wide of the post.

Knocked down on their knees Turkey players tried to get back into the game when Burak Yilmaz, who turned away from Pique inside the area before attempting to curl one into the top corner, but he pushes it far and wide of target.

Same player got another chance to score after finding space inside Spain box, but Pique was spot on with his challenge to prevent Turkey striker from getting on the score sheet.

Having recorded a comfortable lead, Del Bosque’s men slowed down their pace a bit and it was a bit slower affair with Spain effortlessly controlling the play in the centre of the pitch never allowing Turkey to get close to goal.

Alvaro Morata deserved Man of the Match title tonight with inspiring performance both in front of goal and in defence. Juventus striker was brilliant in attack, but he also played great hand in helping his team defend making a number of excellent defensive headers.

Morata’s double and Nolito’s goal were quite enough for an easy win in the end with Spain booking their place in the round of 16. Turkey are standing on thin ice for now as they need to beat Czech Republic in the final match of group stage to stand a chance of finishing third and possibly advancing through.