Sweden 0-1 Belgium: Five things we learned as Ibrahimovic and co. crash out of Euro 2016 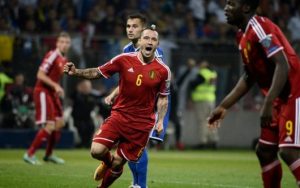 Sweden have played their final game at the 2016 European Championship finals on Wednesday night as their 1-0 defeat to Belgium has signalled the end of the road for Zlatan Ibrahimovic and his teammates.

As Swedes crash out of the tournament after groups stages we take a look at 5 things we learned from tonight’s game in Nice:

Belgium fans were forced to wait late in the game for Marc Wilmots’ side to crack open resilient Sweden and it was AS Roma enforcer Radja Nainggolan who scored a winner for Belgium to send his team to the knockouts as the second-placed team in Group E, behind Italy who lost 1-0 to Ireland.

Chelsea target Nainggolan landed a winner with six minutes on the clock as thumped a brilliant long range effort in much to the pleasure of Belgium fans.

Sweden needed a win in order to extend their spell at the Euro 2016, but Belgium were always in control despite not putting a remarkable performance themselves.

Belgium not to their full potential yet

It’s been a topsy-turvy Euro 2016 campaign so far for Red Devils who went from being humiliated in their group opener by Italy to dominating the game against Ireland to set the record straight and affirm their tournament favourites’ status.

Belgium once again showed worrying lack of form for most of the proceedings against Sweden as Marc Wilmots’ men have been less than spectacular struggling to build on the win over Ireland.

Red Devils will have to improve their game if they intend to make further progress in the competition. Belgium go head to head with Hungary in the round of last 16 and the team which held Portugal to a 3-3 draw earlier today needs to be taken very seriously.

Kevin De Bruyne and Yannick Ferreira Carrasco have perhaps been the brightest sparks in Belgium’s team thus far, but Romelu Lukaku and Eden Hazard are expected to raise the level of their performances when it is needed the most and help their team progress.

It has been a pretty successful season for Radja Nainggolan who helped AS Roma achieve Champions League football next season with six goals in 35 Serie A appearances last term.

Belgium midfielder has managed to make a name for himself asserting his presence in the squad and alarming several Europe’s top clubs who are exploring an option to sign the 28-year-old during summer.

Premier League giants Chelsea are leading the line with Italy head coach Antonio Conte ready to pounce for the powerful enforcer during summer. AS Roma are confident Nainggolan will stay where he is and have prepared an increased contract renewal to tie their man down.

With his fantastic performance at Euro 2016 Radja Nainggolan has done plenty to increase his value and goals against Sweden is a worthy reward for his excellent season.

Sweden one of the biggest disappointments

Erik Hamren’s side have made their first attempt on goal in their final match of the group stage of the competition and this piece of information illustrates the extent of their disappointing campaign in France.

Sweden have been fortunate to earn a point against Republic of Ireland in their Group E opener having drawn thanks to an own goal and their game versus Italy showed little improvement as Swedes were crushed in the closing stages of the game courtesy of Eder’s winner.

Zlatan Ibrahimovic and his teammates headed into the clash with talented Belgium squad without a single shot on target and tonight’s game did provide improvement to statistics, but not to the prevailing disappointing feeling.

Zlatan Ibrahimovic will be missed in the Swedish national team

Swedish living legend has scored 62 in 116 appearances for his country and has been a towering force in Sweden’s attack for years now.

His decision to abandon the national team has been on the horizon for quite some time, but his official decision to leave is effective immediately with Sweden out of the Euro 2016.

Former Paris Saint-Germain striker left an indelible mark on Swedish football having become Swedish top scorer with many a spectacular goals during his time with the national team.

A player who has achieved so much at the club level, having won everything there is to be won, except the elusive Champions League trophy, Zlatan has had less success with his national team ans his time with Sweden has been less fruitful.

Nevertheless his raw quality, physical dominance and incredible character will be sorely missed at the international level.