The difference between Arsenal and Barcelona 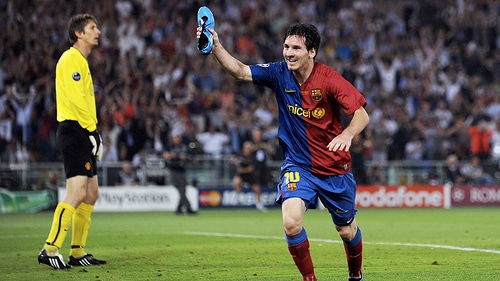 I watched two very different games over the weekend. Firstly I watched Arsenal throw away a two goal lead at West Ham to draw 2-2. The second game I watched was Barcelona’s 6-1 hammering of Real Zaragoza in the Nou Camp.

In an article I wrote earlier this season I compared Arsenal’s style of play to the European champions. I also wrote in that article that the Gunners don’t quite have the same quality of player. On their day the Gunners attacking play is almost as good as the Spanish sides but they just lack a key component.

The big difference between the two sides is the ruthlessness that Barcelona possess. Arsenal have this tendency to shot themselves in the foot. Their soft underbelly or glass-chin as one commentator called it has cost them dearly in recent weeks and months.

This softness has resulted in Arsene Wenger’s side not winning a trophy in four years. This season they have suffered defeats at Manchester United and Manchester City when they could have easily taken three points. Its this lack of ruthlessness that will mean the Premier League title will evade the Gunners for another season.

The so called ‘invincibles’ of Arsenal were always ruthless. A crucial part of that team was the hard-tacking and tenacious Patrick Vieira. At times he was too tough tackling but he added steel to a team full of skillful players. However he was also a box to box player and was handy at grabbing the odd goal.

Barcelona have a hard centre in excellent midfielder Seydou Keita. The Malian international is a superb box to box player,Ã‚Â  in the same mould as the Frenchman in his prime. He got his reward for all his tracking back against Zaragoza as he scored helped himself to a hat-trick.

Keita has even displaced another top defensive midfielder Yaya Toure in the starting line-up. With Keita in the team Pep Guardiola has been allowed to push Andres Iniesta into a more forward position were he can supply the likes of Leo Messi, Xavi and Zlatan Ibrahimovic with the ball.

Arsenal don’t have that tough defensive midfielder to allow Fabregas, Arshavin and Co. to push forward without worry of conceding. The aforementioned Yaya Toure would be an ideal signing, if the Gunners have the funds. Alexandre Song has played there in recent months but doesn’t look ready to fill that role permanently.

Another player who has been earmarked for that role is French midfielder Abou Diaby. He has even been compared to former Gunners captain Vieira. However he has recently came out and said that he is very different from the Inter midfielder. He has admitted that he feels Vieira is a stronger more aggressive player than himself. I also think that Diaby is more of an attacking player.

Barca had something of a blip before the weekend with a draw against Valencia at the Mestalla and suffering a shock 2-1 defeat to Russian champions Rubin Kazan at the Nou Camp. However it was just that a blip. The Barca of last season showed up at the Nou Camp on Sunday night and they were unstoppable.

They had Zaragoza tied in knots and the team is never happy to rest on their laurels. Even after they had scored six they were still pushing forward to score a seventh goal. Messi looked back to his fantastic best and Zlatan Ibrahimovic was also superb.

I have to admit I thought Inter got the better deal receiving Â£40million and Samuel Eto’0 for the enigmatic Swede. My opinion of the Swede has been completely changed since his arrival at the Nou Camp. I always thought he was an expensively luxury but he is now showing why Guardiola parted with the superb Eto’o and so much money.

Ironically like I have said before I actually think Arsenal are more suited to the European stage than the Premier League. Even after drawing their last Champions League game at AZ Alkmaar I think Arsenal can be a force in this season’s competition, even without the previously mentioned tough tackling midfielder.

European champions Barca will recover from the defeat to Rubin Kazan and win the trophy in my opinion. They are without doubt the best attacking team in Europe. If they hit top gear at any point in the competition then they will be difficult to stop.

barca is not in anyway arsenals mate, arsenal is an underachiver while barca is otherwise. they do not have barcas quality in any part of thge field and r no match for a fit barca team

i think you are right. But i cant be so sure in saying Barcelona is unstoppable. I mean the offensive is with no doubt the best in europe. But as we know The quality of the players of chelsea with the big strength they have. I think Chelsea Could easily beat Barcelona, if they could stop Xavi. I think the head of the Squad of Barcelona is Xavi. Chelsea have problems with the trainer, fact is they always had a bad trainer without including Mourinho and Hiddink ,(my oppinon) I am not a Chelsea Fan but i think CHelsea have… Read more »

Chelsea are strong as well but Barcelona will be too strong for the Blues. I had my doubts about Ibrahimovic before he joined Barca but like I said in my article he has convinced me he is a perfect fit for the Barca system. Another reason for my verdict is that on his day Lionel Messi is better than anything Chelsea have to offer. The only player that comes close is Drogba but they are different sorts of players. Your point on Xavi is a valid one. However if you stop Xavi then you have to stop Iniesta, Messi, Ibrahimovic… Read more »

I guess the Gunners attack is as good as Barca’s when all their stars are fit, namely, Arshavin, Fabregas, Van Persie, Rosicky,Nasri and Walcott.However their defence is very fragile and can be exposed by Barca’s ruthless attacking play. I believe, if Arsenal’s defence improves after the january transfer window, they can really challenge for the Champions league title.

If Arsenal can improve their defence like you said then Arsenal could win the Champions League. I wrote a previous article about how Arsenal are better suited to the European game and I stick by my judgement

the difference between Arsenal and Barcalona? Barcalona are the REAL arses, while Arsenal are a whole lot more respectable, simply cause of VP and some of the legends they used to have at Emirates/Highbury. Barca are getting arrogant. FACT: I translated what some of the Barca fans were saying in Rome back in May. They were still winning and yet, they chanted “F— you Man U!” Gooners may be rowdy, but not arrogant. This applies for both the fans and players. Same caint be said for Barca. Thier defense is weak, Arsenal, but with guys like Gallas and Vermaelen, who… Read more »

@ Mr. Faton:
No offense, but Chelsea arent the team I would want to be on when they go against the two teams actually MENTIONED in the article.

barca is not arsenal mate when it comes to football