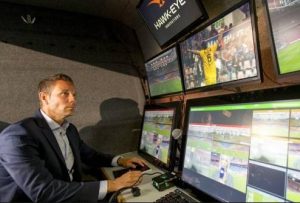 Only a year before one of the highest anticipating manifestations in world football, the 2017 FIFA Confederations Cup was a great chance for the world governing body to put one of the boldest changes in football to its ultimate test.

In another high-profile tournament after the U-20 World Cup in Korea Republic, the newly finished competition in Russia saw FIFA continue the probing of video assistant referees (VAR) technology.

The FIFA Club World Cup UAE 2017 in December will be the third luck the charm for the VAR system but midway through the testing process there are important conclusions to be made already.

The overall use of video technology has come under heavy criticism at the 2017 FIFA Confederations Cup.

A novelty welcomed not as warmly as one would have thought has come under scrutiny in the final match of the tournament as well, as Germany emerged winners from the 1-0 final against Chile.

Chile defender Gonzalo Jara took centre stage in the match as he appeared to have elbowed Germany’s Timo Werner in the face. And with crowd on the stadium and in front of the TV screens expecting for match referee Milorad Mazic to send the Chilean off, it was the VAR system that saved him from dismissal.

Milorad Mazic went over to the pitch-side screen to have a look at a replay of Jara’s challenge, and decided it was worthy of a booking and not a red card. It ended up being not the first moment of controversy involving VAR at the tournament as the use of technology remains challenged by the demanding public.

People are hard to indulge and controversy is something most of us feed our soul with. Football fans love arguing about what wasn’t or could have been, love locking their opinions in a head-to-head challenge and the introduction of technology might just end up taking that precious feeling away from us.

What is worse, it can end up introducing a bitter feeling of injustice and wrongdoing as was the case on several occasions during the 2017 FIFA Confederations Cup.

In effort to avoid being misinterpreted I must say I am in favour of technology, but only to some extent. Goal-line technology is the best example of a positive aspect of technical advances in football.

But the overall use of VAR for every single aspect of the game is not what I am in favour of. There were three instances that saw VAR bring nothing but confusion and controversy up to the plate at the Confederations Cup.

It all started in the group stage. The match between Mexico and New Zealand witnessed a long delay late in the match as the referee watched back a brawl involving a couple of players. The referee initially booked one player, but stopped the game again to brandish two more yellow cards.

Worse yet, the VAR system led to a referee sending off wrong player in a group game between Germany and Cameroon. The match official did rectify his mistake after a second viewing, but it was another moment of great controversy nonetheless.

And ultimately, Jose Fonte appeared to have fouled Francisco Silva in the box during the semi-final match between Portugal and Chile. On this particular occasion, the referee did not award a penalty or even ask to review the incident.

On the other side, there were two instances that VAR system worked correctly. Sort of.

Pepe’s goal against Mexico in Portugal’s opening game at the tournament was rescinded for offside after a VAR review, whereas the same thing happened in Chile’s match against Cameroon. Eduardo Vargas had a goal ruled out for a marginal offside in an incident that – however correct – eliminates the benefit of the doubt and kills another edge of the game we had been fiercely debating over before VAR was introduced.

What Does the Future Hold for Football and VAR?

Fair play is what people at FIFA are holding for as the biggest argument in favour of the VAR technology. Truth be told, FIFA has seen a fair share of criticism directed toward it for several major and quite costly errors in the past and hte VAR has stepped up the efforts to eliminate the threat of a human error.

The critics will continue to dispute the use of VAR in football, however, claiming it kills the human element of the beautiful game.

The point in question remains, askin how the VAR system will deal with subjective decisions.

We saw it work with factual ones but Jara’s blatant elbow provides a strong argument that claims VAR still has a long way to go before it’s officially recognized as a working and effective model to improve the modern-day football.