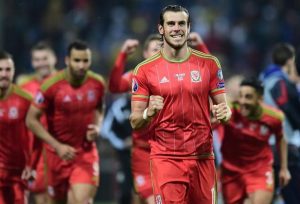 Living the dream / Image via sports.vice.com

Chris Coleman’s men stood their ground firmly, taking blows in the opening stages of the match against Belgium only to come back from the dead and execute an impressive 3-1 for a place in the semi-final of the 2016 European Championship finals.

Following a highly entertaining match between Wales and Belgium in Lille here are the 5 things we learned:

Belgium headed into the Euro 2016 quarter-finals being labelled as favourites to win the game and progress to the semi-final. Despite several injury problems Red Devils opened the game in dominant fashion taking the lead through Radja Nainggolan after 13 minutes in the game.

Roma midfielder scored a long range beauty, but his incredible effort did little to deter Wales and take them of their course.

Chris Coleman’s men never surrendered and fought hard to earn their much deserved win after an incredible comeback with goals from Ashley Williams, Hal Robson-Kanu and Sam Vokes, who sent Wales through to a last-four showdown.

Wales will lock horns with Portugal who have found their way into the semis without a single win in regular time so far in the tournament.

Marc Wilmots’ team is a group of quality individuals, whose individual abilities do not take centre stage as Belgium display worrying lack of confidence and self-belief to close the game and finish their rival off when they have the chance.

Having opened the game with a superb strike from Radja Nainggolan, Belgium pulled back allowing Wales to take matters into their own hands.

For a good part of the game Belgium were out of the game with Lukaku brothers showing surprising lack of concentration and composure in such an important game.

Wilmots was forced to start Romelu Lukaku’s younger brother at left back, but chose to sub him in the second half in order to bring in more attack-oriented Dries Mertens.

Introduction of Fellaini and Mertens did shake things up for Belgium who regained control at the beginning of the second half, but Wales displayed commendable level of discipline and unity to see off any advances from persistent Belgians.

Much has been debated about Wales being a one-man team with star performer Gareth Bale as the main force for Chris Coleman’s side.

Real Madrid winger scored three goals so far, but his contribution goes beyond goals with Gareth Bale being a proper team player. Goals from Williams, Robson-Kanu and Sam Vokes ultimately show equal distribution of team duties and once again prove fantastic team spirit within the Welsh side.

Ultimately, Chris Coleman should be applauded for tactical brilliance as Wales manager really did raise the level of his team’s performances and increased the quality of their play. Wales are entertaining, efficient and effective, and they need to be taken as tournament favoruites at this point.

Marc Wilmots struggled with huge selection issues prior to the Wales game.

Torn ankle ligaments have ruled out Jan Vertonghen from the finals, while Thomas Vermaelen was banned due to yellow card suspension and Belgium manager was forced to field a second-string defence at the most inconvenient time of all.

What is more, Eden Hazard was also under a doubt for Wales game, but Chelsea star and Belgium captain managed to shake off his problems to be fit to start.

It did little to help his team though, as Belgium make-shift defence with younger of the Lukaku brothers struggled to find his purpose in the team. Romelu did not had a much better night as well as Everton striker failed to put pressure on Welsh back four for the most part of the game.

History In the Making

Wales are having a wonderful football dream at this moment.

Coleman and his team have made history by earning their right to fight at a major tournament after more than 50 years and their dream has gone beyond the qualification, group stage and knockouts all the way to their first-ever Euro semi-finals.

It has to be pointed out that Wales reached this stage of the competition in brilliant fashion, with a string of wonderful performances and convincing play, scoring at least a goal in each of their games so far.

Up next is the Portuguese national team with Real Madrid star Cristiano Ronaldo at the forefront.

Portugal reached the semis without a single win in regular time thus far, but will lack no motivation following their nail-biting penalty finish against Poland.

Wales are heading into the semi-finals without any pressure and it will be exciting to see if they will be able to make another huge step towards the unthinkable.