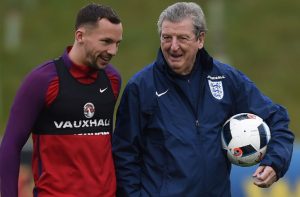 Was Hodgson right to omit Drinkwater? / Image via thefa.com

Roy Hodgson has initiated a huge debate with his decisions regarding the final squad list of 23 men he will be taking to Euro 2016 finals in France.

Manchester City midfielder Fabian Delph picked up an injury that ruled him out prior to Roy Hodgson’s final decision, while Newcastle United and Leicester City midfielders Andros Townsend and Danny Drinkwater respectively were the two players not to survive the cup.

Plenty of eyebrows were raised upon the final announcement as huge part of public finds is odd for England manager to leave the Premier League champion behind, while at the same opting to lay his faith into the injured arms and legs of Liverpool striker Daniel Sturridge and  ever-unfit Jack Wilshere.

There is one thing that presents itself as a conclusion to this article’s introduction – England has not had such a competitive squad in the senior team for a while and Roy Hodgson’s job of picking the final 23 was in all honesty a hard one.

It is also the youngest team England have ever had at a European Championship with an average age of 25.

Leicester City midfielder Danny Drinkwater has had an outstanding season. The 26-year-old former Manchester United player’s work rate has been nothing short of impressive and all he’s done for Foxes this season has gone unnoticed a lot of the time. His dedication, however, commitment and tireless efforts have made a great contribution in Leicester’s title run.

A simple glance at his numbers will speak volumes as Danny Drinkwater is the midfielder who made the most tackles of any English player in the Premier League this season with his tally of 103.

Leicester City midfielder won three caps for England since his debut in March when he was voted man of the match in the 2-1 defeat by the Netherlands.

His inclusion in the provisional squad of 26 was met with universal approval, and it is only understandable that he feels disappointed with the omission despite the fact both he and Townsend took the news in respectful, professional manner and wished the team success in France.

Drinkwater later on took it to Instagram to express his feelings regarding the omission and he stay classy and respectful in his message where he wished his friends to “bring it home”.

Disappointed not to make the final 23! Would of been a fantastic experience to go to the euros as a player… But I’ll be supporting the country like I always have! The seasons been a huge positive for me.. Going into next season as a premier league champion! Good luck to the lads… Bring it home 🙌🏼 #england

Arsenal midfielder Jack Wilshere seems to be the biggest surprise on the list and the biggest talking point.

The 24-year-old England international has had a terrible season and most disappointing 18 months behind him, having played only 141 minutes in the Premier League this season after breaking a leg. The 2014-15 season proved to be not much better than thist last one as Wilshere played 732 minutes in the league, adding two goals in the process.

Wilshere’s inclusion was characterised as a choice of “reputation” over “form” as Jack Wilshere prepares for a European Championship that could very well define his Arsenal career.

Roy Hodgson will have a difficult time explaining his choice to include Wilshere and leave Drinkwater out and all England boss had to say thus far is that “it was a tough decision”. It gets even harder knowing that Hodgson is now left with Eric Dier as the only classic holding midfielder in his squad, while he opted to have five strikers on his list, including the injury-ravaged Daniel Sturridge.

Sturridge has been hit by fitness concerns lately and was widely expected not to make the cut at the expense of Marcus Rashford who did enough to convince Hodgson that he deserves to travel with the team. And while Manchester United striker’s inclusion has been interpreted as a further investment in youth and a chance for Rahford to gain invaluable experience that will help him grow, Sturridge’s inclusion has been met with split opinions.

Former Chelsea forward only trained for the first time on Monday, but his proven goal scoring records serve as a guarantee that he would always be involved should he prove his fitness.

With Rooney envisioned to operate behind the front line, Hodgson’s line-up makes plenty of room for both Rashford and Sturridge; so we’re back to Wilshere being the most obvious odd one.

My personal opinion is that Roy Hodgson has made a mistake and that his choices, as bold as they are, might prove to be too big of a gamble on the long run.

Euro 2016 finals are not far away and England only have Portugal on Thursday before their first group match against Russia on 11 June. The Three Lions are given the odds of 19/20 to start the final showpiece with a win.

Perhaps Jack Wilshere could go on to reassure us right from the start?