Antoine Griezmann the star amongst a galaxy at Euro 2016 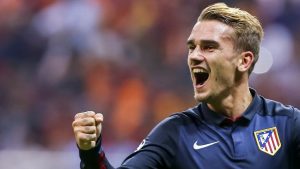 France striker Antoine Griezmann has been the star of Euro 2016

This summer’s European Championships was built up as a star-filled festival of football.

The stars of the European game such as Cristiano Ronaldo, Gareth Bale, Robert Lewandowski and Thomas Muller are key players for their club sides and have been their country’s heroes in the past.

However, one man has outshone the quartet. A diminutive striker who’s grown in reputation in recent years, that man is France and Atletico Madrid star Antoine Griezmann.

Griezmann heading for the Golden Boot in France

The 25-year-olds scoring record for Atletico Madrid over the past few years has been highly-impressive and the forward has now transferred his club form to the international stage. His six goals at Euro 2016 make him the top scorer and the favourite to win the Golden Boot at odds of 1/100.

Griezmann is three goals clear of international teammates Dimitri Payet and Olivier Giroud, with Portugal’s Cristiano Ronaldo also on three goals. All three players are good, but even a player Ronaldo’s ability will struggle to catch Griezmann now.

A hat-trick from the Real Madrid cannot be ruled out, but neither can Griezmann adding to his goal tally on home soil. The fact that he has outscored arguably more illustrious strikers shows the strikers sheer ability to find the net and growing stature.

Winning the award would illustrate just how far the former-Real Sociedad star has come in recent years.

His form has improved throughout Euro 2016

A number of reasons have been mooted for his disappointing display. The first was that he was still recovering mentally from missing a penalty in Atleti’s Champions League final defeat by arch-rivals Real Madrid.

Another was that he was simply fatigued and needed a rest. He got a rest, as he was left out of Les Bleus starting line-up for their second game against Albania. However, he came off the bench to break the deadlock with a late header and helped the hosts secure a 2-0 win.

Since that goal he has gone from strength to strength in front of goal, a double against Republic of Ireland was followed by a goal and two assists in the 5-2 mauling of Iceland.

However his most important strikes obviously came in Thursday night’s 2-0 win over world champions Germany to get his national team through to Sunday’s final.

Prior to the two goals against Germany he may have been accused of being a bit of a flat-track bully, only scoring goals against smaller teams, but a brace against the world champions, even if they were under-strength in defence is still a major achievement.

Hosts France started Euro 2016 as one of the favourites to win the trophy and become European champions and with just cause. Les Bleus have a number of high-quality individuals, who have all at some point contributed to the teams cause, none more than Griezmann.

Didier Deschamps team now face a Portugal side that were probably fortunate to be the side of the draw that they were, because they have been relatively poor. Star player Ronaldo had endured a frustrating campaign until the 2-0 semi-final victory over Wales on Wednesday night.

He scored twice against Hungary in the group stages, but in all he has underwhelmed in the other games. All around Portugal have not looked great, as a team or on an individual level. They certainly would not be popular winners if they triumphed in Paris in the final.

France have won the competition twice before, in 1984 on home soil with a Michel Platini inspired triumph and in 2000 in Belgium and the Netherlands.

Les Bleus are clear favourites to win the trophy and history is on their side, as they have defeated Portugal in their last ten meetings. I certainly would not back against that run being extended to 11 on Sunday night.

The final could once again be a chance for Antoine Griezmann to prove that he is a star and outshine illustrious rival Cristiano Ronaldo in the process. For me France has been the best team at Euro 2016 and Griezmann the best player, so a French victory would probably be a just result.