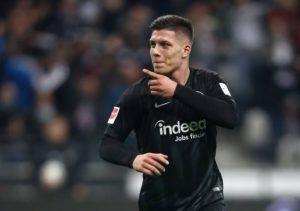 It looks like Real Madrid have got themselves a new striker! According to AS, the Spanish giants have signed Luka Jovic from Eintracht Frankfurt! The Serbia international has signed a six-year deal with Real Madrid in a €60m deal and will be their player until June 2025.

AS also claim Eintracht Frankfurt will get €48m from this transfer, as Benfica are due to earn 20 percent of the transfer which the Portuguese club negotiated when they were selling Jovic to Bundesliga club and that amounts to €12m.

It is noted in the report that Madrid had accelerated talks with the player and the club in order to sign him before other clubs enter the race and drive his price up. Real Madrid were especially eager to ward of interest from teams like Paris Saint-Germain. Some German media claim that Eintracht will want to get Mariano Diaz go in opposite direction as part of the deal.