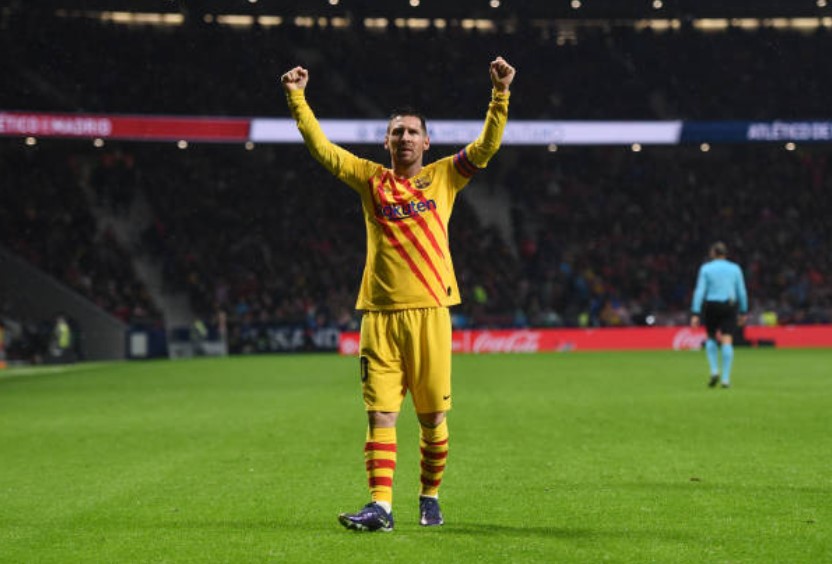 Atletico Madrid and FC Barcelona played a tightly contested affair Sunday at Wanda Metropolitano. However, and even though there were lots of chances at both ends, only one goal was scored. A late goal from Lionel Messi lifted Barcelona to a huge 1-0 away win, a result that sends Los Blaugranas back to the top spot in the Liga standings.

Atletico Madrid started slightly better, though. Kieran Trippier smashed the post just seven minutes into the game, and Mario Hermoso also had a clear chance that he couldn’t capitalize in the first 20 minutes of action. Barcelona’s first clear scoring chance came through Ivan Rakitic, who tested Jan Oblak from long range, but the Slovenian made an easy save.

Luis Suarez and Alvaro Morata traded chances late in the first half, but Barca’s best scoring sequence came in the 43th minute thanks to Gerard Pique. The centre-back smashed a header off the bar when Oblak was beaten. As a result, the first half ended with a scoreless draw although fans were clearly enjoying a very intense match.

Things slowed down a bit in the second half, as the first clear scoring chance came in the 61st minute when Messi tested Oblak, but the goalkeeper was magnificent once again. Atletico responded with Angel Correa 10 minutes later, but Ter Stegen made another big save. At that point, both goalkeepers were among the biggest stars of the match.

It seemed the game was going to end scoreless, but Messi had other plans. The Argentina international drilled a shot into the bottom left corner out of Oblak’s reach in the 86th minute. It was an excellent goal from the Argentinian, and one that could be very valuable in the title race.

Atletico Madrid just didn’t find a way to turn things around. As a result, Los Blaugranas stole a huge win on the road, and that result lifts them to the top spot in the standings once again. Meanwhile, Los Colchoneros fell to 6th place in the standings, and the title is feeling further and further after each week.

A freelance writer and sports analyst with almost five years of experience in the industry before joining SoccerNews, Juan Pablo Aravena is based in Chile and currently contributes to several publications and websites including SoccerNews, 12up, and Sports From The Basement, while also working as a fantasy beat writer for RotoWire, as a database editor for EA Sports, and as a football analyst for SmartOdds and InsideFutbol. His areas of focus are Serie A, Bundesliga, Premier League, LaLiga, and Ligue 1, but he has also written about MLS and South American football in the past.