Can Ronaldo and his team topple European champions Spain? 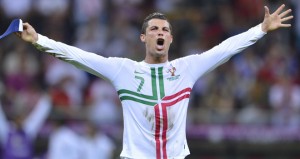 Cristiano Ronaldo and his Portuguese team face Spain in the semi-finals of Euro 2012 this evening.

Portugal head into the game as underdogs but have looked impressive at the tournament so far.

Their main man at the tournament has been none other than talisman Cristiano Ronaldo.

Ronaldo will be very familiar to the opposition, considering he plays in La Liga with Real Madrid and plays alongside lots of the Spanish players. Los Roja will know all about his strengths and weaknesses. Spain and Real defender Sergio Ramos will be confident of keeping his Los Blancos teammate quiet.

At international level Cristiano Ronaldo has been a big let down. For the first few games of this tournament it looked as though Euro 2012 would be the same old story for the former-Manchester United star.

However, in his last few performances he has shown his best form and has looked like the Ronaldo that fired home 46 La Liga goals last season. He is obviously the biggest threat to the Spanish defence that the Portuguese have to offer and will no doubt cause Spain problems.

The only problem for Portugal against Spain will be gaining possession of the ball for Ronaldo to be a threat. The Spanish dominate possession against most of their opponents and I don’t think this evening’s clash will be any different.

The likes of Xavi, Xabi Alonso and Andres Iniesta are masters of keeping the ball and making their opponents work hard just to get it. Portugal will have to make the most of the ball when they have it or they won’t cause the Spanish much trouble.

Croatia had chances against the Spanish in the last group game and could have knocked them out of the competition. However, those chances were missed and Spain edged through. The Spanish were more convincing in seeing off France in the quarter-finals though.

It looks like they could still go up a gear and that could be tonight. The Portuguese midfield trio of Raul Meireles, Joao Moutinho and Miguel Veloso will have to work hard if their team has any chance of making it into the final.

Portugal do possess an attacking threat through the likes of Ronaldo and Nani if they can the ball though. Both wingers can be match winners on their day. Although Ronaldo has really found his form during Euro 2012 we haven’t seen the best of Manchester United winger Nani.

The wing wizard can be a slight enigma at times. He can brilliant one moment and infuriating the next. He definitely has the talent to cause Spain problems though and he will need to make the most of whatever possession he gets.

Even with Ronaldo in their team I think its unlikely that Portugal can get the better of the world and European champions. Portugal will have to play at their very best and Spain will have to have an off-night.

I just think that Ramos and co. have too much knowledge of how to shackle Ronaldo and if they do that then Spain won’t have much more of an attacking threat to deal with.

Its been an incredible year and season for Cristiano Ronaldo for club and country. Can it end on a high on Sunday? I don’t think so, but if it doesn’t at least Ronaldo has now shown that he can produce on the international stage and hopefully he can continue to show his best form in the international arena.

Can Portugal defeat Spain to reach the Euro 2012 final?