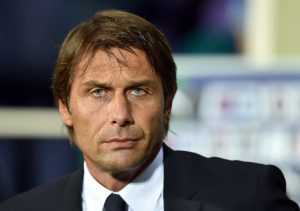 Italian boss Antonio Conte has already had an effect at Chelsea

Chelsea’s starting line-up for their opening Premier League game of the season against West Ham on Monday night was a familiar one.

In fact, ten of the eleven players that started in the 2-1 win over the Hammers were at the club in last season’s forgettable campaign.

Only French midfielder N’Golo Kante had been added to the starting lineup from a team that struggled badly last season.

Yet it was not the same Chelsea that struggled for wins last season. There seemed to be a new spring in the player’s step.

Antonio Conte has made a change at Chelsea

To be honest it was not a vintage Blues performance by any stretch of the imagination and it took a late goal from controversial striker Diego Costa to win all three points.

However, there was more intensity, a higher work-rate in that Blues team. The players who had previously been outstanding in their title-winning campaign Eden Hazard and Costa were again influential.

Costa was lucky to stay on the pitch after a poor tackle on West Ham goalkeeper Adrian while he was on a yellow card. Despite that, he put in a far more all-action display.

Hazard was also more lively, but let’s face it was hard to Hazard to be any less lively than he was for much of last season when he was anonymous for virtually the whole campaign.

The fact that Chelsea kept going and kept looking for a winner after the setback of James Collins’ equaliser is a testament to the spirit that Conte is attempting to instil in his team.

Chelsea of last season may have settled for a draw, considering they drew eight of their last ten games at the Bridge last season. Not under Conte though.

Not afraid to make big decisions

One of the most interesting facets of Conte is the fact that he is not set on one tactic or afraid to make big decisions. His tactical flexibility in admirable, as he is not stuck on one tactic like some managers who only seem to have plan A, but are lost when it comes to plan b.

His decision to take off star winger Hazard showed he is no respecter of reputations, just as he proved at Juventus and with Italy. The decision to throw on new signing Michy Batshuayi on alongside Costa up front paid off with the winning goal.

The Belgian won a long-ball and it eventually landed at his strike-partners feet. The Spaniard did what he does best, apart from cause trouble and stuck the ball in the back of the net.

The decision to go with two up front was a logical one, considering that West Ham were likely to drop deeper with the scores at 1-1. However, some bosses may have replaced Costa with Batshuayi, but not Conte. The fiery Italian’s celebration on the sidelines showed his sheer passion at his team taking the lead.

Big contenders for the title

There is still much work to do for Antonio Conte at Chelsea. As the Italian said in his after-game interview the team can improve and it was not a great performance. Better performances will come from Chelsea, as they have indisputable quality and a boss that can get the best out of players.

The focus of the Premier League title race may be on the battle of Pep Guardiola and Jose Mourinho in Manchester, but the boys in blue will be right up there challenging City and United for the big prize this season.

Chelsea are currently title odds of 5/1, third favourites to win the Premier League. Not much has changed in the betting since the opening games of the season for Chelsea, United or City. They are still the three teams to watch in the title race.

No doubt the Blues are a work in progress and if the British tabloids are to be believed (not always a wise move) then Antonio Conte has not yet finished his recruitment drive this summer.

With two weeks of the summer transfer window to go the Italian still has time to add to the quality he already has and build an even stronger squad.

It may not have been a spectacular start to the campaign for Chelsea and Conte, but the performance was a typical one from a Conte team. The Blues will be a different prospect under the Italian and it could spell danger for their title rivals.

Can Chelsea win the Premier League this season?