De Ligt says ‘there is nothing yet’ regarding his future 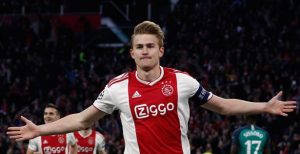 Ajax have done it! They have won the Dutch double, after clinching Eredivisie on Wednesday night. Ajax beat De Grafschaap 4-1 as the trophy returned to Amsterdam after five years. At the centre of that success was Matthijs de Ligt, their 19-year-old captain, who had the honour of lifting it. After the match, he spoke to media regarding his potential move from Ajax, but according to him, nothing important has happened yet.

“This is not the time to talk about my future,” he told Fox Sports. “I don’t know if I will go with Frenkie de Jong [to Barcelona]. I still have to analyse things and see everything. We’ll see what happens. I cannot say anything. We’ll see at the end of summer. There is nothing yet.”

De Ligt has been one of crucial players this season for Ajax, captaining them to two trophies and a Champions League semifinal.