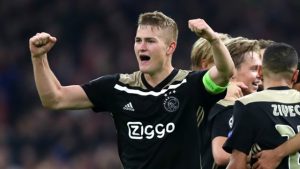 Matthijs de Ligt is in his final days at Ajax. The captain of the Champions League semifinalist and current leader of Eredivisie is close to moving away from Amsterdam and Edwin van der Sar, director of Ajax, confirmed that as well.

“I think these will be De Ligt’s final games with Ajax, but I hope he goes out on a high,” Van der Sar told Sky Sport Italia. “He’s been here since he was a child and will end up at a big club.” On De Ligt – who scored the opening goal in the Champions League semifinal second leg before Lucas Moura’s hat-trick sent Ajax home – Van der Sar added: “I think he’ll go to England or Spain.”

Several European clubs are already interested in him, with clubs like Manchester United, Manchester City, PSG and Barcelona all interested in him. If we erase PSG from this list due to being from France and Man United due to not playing in Champions League next season, the list gets of potential moves gets shorter.