France are justified favourites for Euro 2016 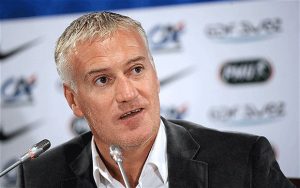 The European Championships starts in just over a week’s time in France. The home nation is regarded by many as the team to watch and their tags of favourites to win the tournament is highly justified.

Les Bleus are currently odds of 3/1 to be crowned champions of Europe for the third time in the history of the competition.

The previous French wins came 16 years apart in 1984 and 2000 so maybe that is an omen for Didier Deschamps side, as it has now been 16 years since their last triumph.

Undoubted quality in their squad

France have immense quality in their squad heading into Euro 2016, players at their peak playing in the biggest leagues in the world at the top level of the game, some play in the Premier League as well!

Joking aside Deschamps squad does contain a number of players who are heading into this tournament on the back of stellar campaigns. Les Bleus squad contains two of the stand-out players from last season’s Premier League in Leicester’s N’Golo Kante and West Ham playmaker Dimitri Payet.

It is hard to believe that a year ago Kante was an unknown midfielder. The 25-year-old has just enjoyed a dream debut campaign in the English top-flight, winning the title with Leicester and is now regarded as one of the best midfield enforcers in the European game.

Kante has made just three appearances for his country, but such was the effect he had for the Foxes it seemed impossible for Deschamps to leave him out the team.

The mercurial talents of Payet were ignored for a long time by his national side, as he was regarded as a maverick. However, just like Kante his form last season was too hard to ignore. His return to the national side has already been marked by some virtuoso performances and goals.

Not only are Kante and Payet available for midfield selection, but also Juventus’ box-to-box midfielder Paul Pogba, who is considered one of the best midfielders in the world game.

The youngster seems to have every attribute a world-class midfielder should have, technique, power, vision and the ability to pop-up with a goal as well.

France have arguably the best midfield options at this tournament and that is without mentioning the likes of Blaise Matuidi and Morgan Schneiderlin.

French have a plethora of forward options

Up front Les Bleus options of Anthony Martial, Antoine Griezmann and Olivier Giroud are not too shabby at all. Real Madrid striker Karim Benzema was undoubted first choice, but an alleged blackmail scandal has meant the former-Lyon striker has been left out of the squad.

Although the striker will be missed there is ample quality to replace him. Atletico forward Griezmann has to be the man to start up front, despite Giroud being amongst the goals of late for his country.

Question marks still remain over Giroud at the top level. His 14 goals in 47 appearances is not a great record and Les Bleus supporters do not seem keen on the former-Montpellier striker leading their attack.

Martial is an exciting option for Deschamps to have heading into this competition. The youngster impressed in his first campaign in the Premier League. He has mostly played on the left wing for his country and may once again start out wide at Euro 2016.

Hard to dismiss France’s chances of being champions

It is hard to find any weaknesses in the French team. The only weakness that Les Bleus may have is one in defence. Deschamps team will miss the injured Raphael Varane, while the likes Patrice Evra and Bacary Sagna are heading into the twilight of their career and may struggle against pacey opposition.

Arsenal’s Laurent Koscielny could be a key player for France, especially with the absence of Varane and could start in the centre of defence alongside Manchester City’s Eliaquim Mangala.

Incredibly France are ranked 21st in the world ranking, two places below Group A rivals Romania, who will be regarded as major underdogs when the two teams met. That ranking is likely skewed by the fact that Les Bleus have only played friendly matches for the last two years.

Didier Deschamps team have not looked unbeatable, but eight wins out of their last nine games suggests that they are already in a winning habit. On paper France look to have one of the best balanced sides in the competition, whether it’s the same on grass only time will tell.

What we do know is that French boss Didier Deschamps has some serious talent at his disposal and if used right then the home nation will be the team to beat at Euro 2016.

Will France triumph on home soil this summer?