Germany are not invincible at Euro 2016 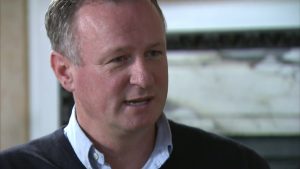 Northern Ireland face a seemingly daunting task at Euro 2016 on Tuesday as they face world champions Germany in their last game in Group C.

No doubt Michael O’Neill’s side will go into the clash as major underdogs and are in fact odds of 14/1 to record a win, but Germany showed some weaknesses against Poland and even Ukraine at times.

No doubt Joachim Low’s team are a cut above most teams at this competition, but they are certainly not invincible.

Where is Die striker?

That is the question from most neutrals. Teams can be successful without an out-and-out striker, with Spain at recent tournaments a good example, but it does not happen very often. The players need to have a telepathic understanding for it to work.

The current Germany team do not seem to have that understanding. The likes of Mesut Ozil, Julian Draxler, Thomas Muller and designated false number nine Mario Gotze are all good players, but they do not seem to have the same football intelligence that the Spanish striker-less teams had in the past.

Germany have been famous for producing top goal poachers in the past in the likes of Gerd Muller, Jurgen Klinsmann, Rudi Voller and Miroslav Klose. They were all different players, but the one thing they had in the common was that they all knew where the goal was.

Die Mannschaft do not have an out-and-out striker in their squad of the calibre the aforementioned forwards, but in Bayern Munich star Thomas Muller they have a talented forward, who is a highly-intelligence football.

The 26-year-old star is prolific starting from a right-wing position, but he started his career as a centre-forward. Gotze has been used as a false number nine in the opening games and last time out the world champions failed to produce a shot on target in a goalless draw with Poland.

I am not trying to question a World Cup winning boss in Joachim Low, but maybe it is time Muller was considered as the most advanced forward option, even it may well negate the danger he offers from the wing.

The other German forward options of Lukas Podolski and striker Mario Gomez are not quite the same calibre of the rest of the squad.

Podolski has been a good servant to his country, but has struggled for consistency in recent years, while Gomez has been out of the national squad for a while and is almost considered a last resort selection.

Germany headed into this tournament with doubts over the full-back positions. The full-backs that started in the two games so far Jonas Hector and Benedikt Howedes are not the ideal pair of players for the positions.

In truth Die Mannschaft has struggled to replace Philipp Lahm since the Bayern stars retirement following the 2014 World Cup victory. Howedes actually played at left-back in that World Cup and is a good player, but naturally he is a centre-back. He is better at defending than attacking.

Hector has won just over a dozen caps for his country and again is limited going forward. Liverpool star Emre Can has played at full-back for his national team in the past and may well make an appearance in France as a full-back.

If last year’s Premier League taught us anything then it was that anything can happen in football. It is hard to argue the case of a Northern Ireland recording a victory, but stranger things have happened in club and world football than this game ending all-square, especially with Germany not at their best going forward.

Nine times out ten Ozil, Muller and Gotze and co would triumph against Northern Ireland. However there is always a chance of O’Neill’s side taking something from this game. They only need a draw to take them onto four points, which is likely to take them through.

A narrow defeat could even see Northern Ireland make it through to the knockout stages. The men from the north of Ireland have a history of causing shocks at major tournaments, just ask Spain and Italy.

Germany boss Low may rotate his squad with his team already qualified for the knockout stages. Who knows Michael O’Neill’s side may just pull-off the result they need to make it through to the last 16 of the competition.

Can Northern Ireland upset the odds against Germany?