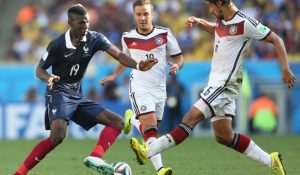 The second semi-final between Germany and France at Stade Velodrome in Marseille promises to be a cracker: two very strong sides having world class players in almost every position. Germany reached semi-final after beating Italy in a pulsating penalty shootout tie, whereas France defeated Iceland 5-2 to reach the last four.

Manuel Neuer is one of a kind, a rare breed. He is bold, fearless, aggressive and adventurous. He loves to take a risk at every opportunity. He is such a brilliant passer of the ball and his distribution from the back makes him a sweeper-keeper as if he is the fifth defender for his team. Rating: 9/10

Lloris is one of the best goalkeepers in the Premier League but doesn’t get anywhere near as much credit as he deserves. He’s a great shot-stopper, commands his area well and has lightning fast reactions. He’s let down by two things: his poor distribution, as he doesn’t look confident with the ball at his feet and often panics. The other is the occasional mistakes he makes, while he is not very secure at crosses from set pieces. Rating: 7/10

Jerome Boateng is a versatile defender who can cover a number of positions at the back. He can also play as a defensive midfielder if needed and has a very good passing ability. He is also good at taking shots from distance as well. Rating: 7/10

Laurent Koscielny is the real ‘boss’ at the heart of Arsenal defence, and fans often call him as ‘Bosscielny’. The best thing about Koscielny is his anticipation and intelligence. A reason why he intercepts more than he tackles. Rating: 7/10

Toni Kroos is a midfield metronome. He is an excellent passer of the ball and quite similar to ex-Portugal midfielder Maniche, though Kroos is a far better player. His job is to circulate the ball throughout the midfield and while it may seem a pretty easy job, in reality it requires a difficult skill set to execute it to perfection. Rating: 8/10

Paul Pogba is a typical box to box midfielder and he is a complete package. He is really good at what he does and arguably one of the best midfielders in the world at the moment. Loves to play more on the left-hand side, Pogba is good at dribbling, taking long range shots, crossing and making intelligent through passes. Rating: 9/10

Both Antoine Griezmann and Thomas Muller are great goal scorers. Griezmann has scored 32 goals last season for Atletico while Muller managed 25. Both players are very intelligent and so good with their positioning that they can operate in any position across the midfield. Both are very good with their finishing: while Griezmann is particularly strong at shooting from distance, Muller is more of a fox-in-the-box and very good with his headers. Rating: 8/10.