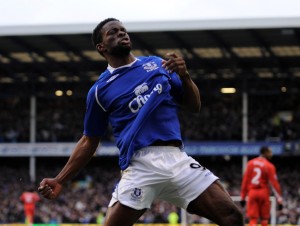 Down the years there have been numerous footballers who have failed to fulfil their potential because they have been constantly hampered by injuries.

Everton striker Louis Saha is probably one of the finest examples of potential unfulfilled.

The French striker has the ability to do some fantastic things with a football and last weekend he showed just what he can do with four goals in Everton’s 5-3 win over Blackpool.

He could even have had five as he had a perfectly legitimate goal ruled out.

As Everton boss David Moyes revealed after the game he was simply unplayable and unstoppable against the Tangerines. Some people have said it was only against Blackpool but it’s difficult to score four goals against any team in the Premier League.

Just when Saha has hit a red-hot patch of form he has now picked up a hamstring injury which will keep him out of action for 10-14 days. This is typical of the Frenchman’s career, particular at Everton.

Just when he is starting to get back to his best form he is struck down with injury yet again. He must be one of the most unlucky players I have ever known for picking up injuries. He must have hamstrings made of porcelain.

At 32 years of age he’s not getting any younger. It will take his body longer to recover from injury but that’s been the case ever since he arrived at Goodison Park. He will want to come back as soon as he can with limited time left of his Premier League career.

Saha had struggled for form until the start of the year and since then he has fired in 8 goals in six appearances. Everton fans thought his form would never recover after a series of injuries had prevented him picking any head of steam. However he has not recovered his scoring form.

For half of the season Everton have struggled to score goals but in recent weeks the goals have been flowing more freely and Louis Saha is a vital part of that. When Louis Saha is fully-fit he is by far the best striker in the Everton squad.

In fact a fully-fit Louis Saha is one of the most dangerous strikers in the Premier League. Sir Alex Ferguson certainly thought he had superb ability when he bought Saha from Fulham for £12.4million in 2004.

Unfortunately, despite winning two Premier League titles and being in the 2008 Champions League winning squad, his United career was blighted by both long and short term injuries. Sir Alex didn’t want to lose the Frenchman but knew that he would struggle to get first team football at Old Trafford.

I just hope that when Louis Saha recovers from his latest injury blow that he comes back in the same form, which he has struggled to do in past seasons. Manager David Moyes has said that he believes Saha will bounce back from this injury setback and continue his rich vein of goal scoring form.

I think every Evertonian is hoping for a scoring return for Saha because this hasn’t been a vintage season for the Toffee’s and the sooner we get away from the relegation zone the better. Louis Saha in scoring form will definitely help the club’s cause.

No. Injuries have kept him from full potential.