Inter Milan steamrolled over Shakhtar Donetsk in the Europa League semifinal on Monday evening. The Serie A side were always going to be favorites against the Ukrainian champions, but the ease with which Nerazzurri got the job done could only have been foreseen by someone well-acquainted with the ways of Antonio Conte.

You’ve probably often heard explanations, though you may have not needed them, about stats sometimes being misleading in football. That was certainly the case in some aspects of this game.

For example, Inter had the ball for no more than 43% of the time played, but the proceedings were never really out of their control. The fact that they had nine shots on target, compared to Shakhtar’s one, shows that clearly.

One set of numbers which goes far to reveal the difference in intensity between the teams was Inter’s 21 fouls, while Shakhtar players committed three.

As always, Conte arranged his men in a 3-5-2 shape, with the names on the teamsheet the same as in several previous matches. Whenever a need to defend the box arose, the 3-5-2 became 5-3-2 with the midfield line dropping so close to the back one that no space between them could possibly be occupied by an opposition attacker. The ways the Ukrainian team could get anywhere near to causing any worry for goalkeeper Samir Handanovic were to either fling a hopeful cross towards striker Junior Moraes who was almost always impeccably marked by at least two defenders, or to let one fly from very long range which never produced a desired result either. 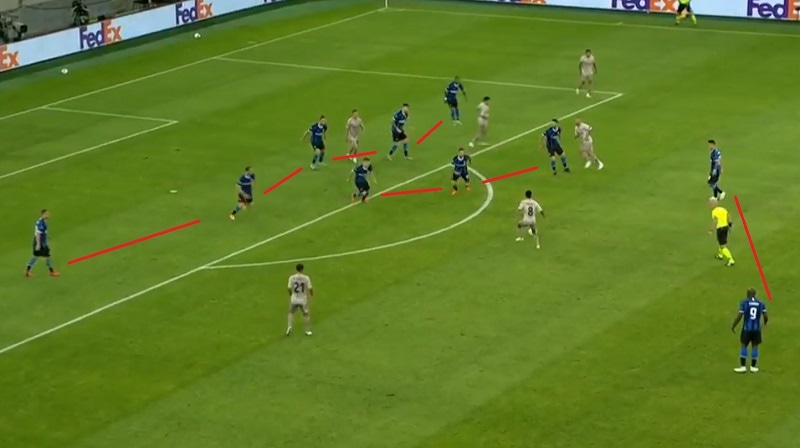 But for most of the game, Inter’s primary aim was to defend as far away from Handanovic as possible. Forwards Romelu Lukaku and Lautaro Martinez rarely let Shakhtar’s centre-backs breathe with the ball at their feet, energetically supported by the three midfielders, Nicolo Barella, Marcelo Brozovic and Roberto Gagliardini. And if the press was broken through, they always found some ways of delaying the attack until their lines were pulled sufficiently back to get behind the ball again. In short, whenever they wanted to attack, Shakhtar players must’ve felt like they were facing many more bodies than there actually were those wearing the black-and-blue of Inter.

The work done by the two forwards certainly matches that of the defenders and midfielders. Both Lautaro and Lukaku once again proved a handful for the opposition defence.

The former Manchester United man pressed Shakhtar’s centre-backs very well and used his tremendous power and surprising pace to cause them additional problems. The Barcelona-linked Argentinian moved from one side to the other relentlessly, often dropping deep to help in defending and still finding enough energy to appear upfront and threaten Andriy Pyatov in Shakhtar’s goal.

With two goals apiece, both forwards will certainly be happy with their evening’s work, particularly Lukaku who has now scored in 10 consecutive Europe League appearances – the competition’s record, but it should be noted that the Shakhtar defence and goalkeeper didn’t exactly make it difficult for them.

On to the final

Sevilla beat Manchester United in the other semifinal on the previous evening by 2-1 and will therefore be Inter’s opponents in the final on Friday.

The Spanish side could, to some extent, be considered lucky to have scraped a win against the 20-time English champions, with United dominating the most of the game but failing too often to get a tangible reward.

If Inter can reproduce their recent performances once more in the final, Julen Lopetegui’s team might just find that playing the way they did against United isn’t enough to see them lift the trophy.