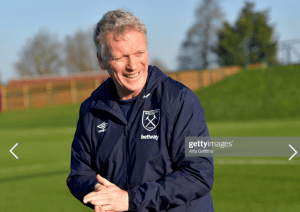 The reappointment of David Moyes as West Ham boss on Sunday was definitely not met with universal approval by Hammers fans. It would be fair to say the appointment of Moyes as Manuel Pellegrini’s replacement was an unpopular one.

The move looks like s short-term one aimed at keeping the Hammers in the Premier League. However, the 56-year-old’s presence is not a guarantee of safety, just ask Sunderland.

West Ham had to make the change

Firstly, West Ham had to make the change and sack head coach Manuel Pellegrini. The Chilean is regarded as a nice guy, but the team’s results have been woeful of late. No home wins in six Premier League games is a terrible record for any top-flight club. To make matters worse they have also suffered four home defeats in a row at the London Stadium.

No doubt there is bigger problems at the east London club than just the teams head coach. However, when results go against a team, the first person to go is the man in the dugout. Something had to change, as the poor recent run of results has seen the Hammers slip down to 17th in the table, and just a point above the drop zone.

As much as David Moyes stabilised Everton in his decade on service on Merseyside, he also hit a ceiling, which he could not break through due to a lack of resources. At times his teams were cautious and unambitious.

Maybe with slightly more ambition the Scot could have taken Everton further. The job he did with the Toffees earned him the chance to manage Manchester United. Unfortunately, replacing a club icon like Sir Alex Ferguson proved too big a job for the Scot.

He lasted just seven months at Old Trafford before his sacking. He moved to Spain and enjoyed a mixed spell with Real Sociedad before returning to England and suffering relegation with Sunderland.

His next stop was a solid spell at West Ham, which last seven months and saw the Scot steer the Hammers clear of relegation. Despite keeping the Irons in the top-flight, his short-term deal was not renewed and in came Pellegrini in the summer of 2018 in came Pellegrini.

I am sure the irony of replacing the Chilean is not lost on Moyes, who may feel like he has unfinished business with the club from the English capital. Hammers fans will be hoping the unfinished business is not taking the team into the Championship.

Where do West Ham go from here?

It is difficult to know what the expectations are for West Ham. Are they happy being in midtable mediocrity or just surviving the drop. A heavy investment in the team over the last few transfer windows suggest that the club’s hierarchy are ambitious and want the club to move forward.

The Hammers main objective this season is obviously to stay in the Premier League. West Ham are currently odds of 5/2 to suffer relegation, fourth favourites for the drop at this point.

If the club achieves the objective of staying up are they going to be happy with Moyes as boss? The former United boss does not seem to be the sort of boss that can bring a major mentality change at the club. He is a boss steeped in failure and nearly-achievements.

If I were a West Ham fan this appointment would depress the life out of me. He may look like a safe pair of hands, but David Moyes is unlikely to bring West Ham long-term success, which is probably why the Hammers have only backed the Scot with an 18-month contract.