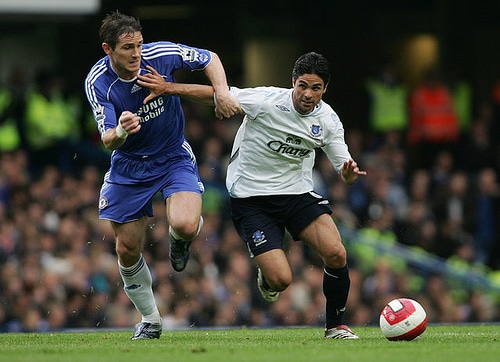 Everton suffered a 3-2 defeat at Bolton’s Reebok Stadium earlier today. It was their second consecutive defeat but that’s not worrying part at the moment. The worrying part for Everton fans and players is the number of players available to boss David Moyes.

David Moyes has done a superb job as Everton boss. He has taken Everton from relegation strugglers to a top six Premier League side. I’m worried for Everton this season though as with every game another player seems to be added to the treatment room.

Everton had one of the smallest squads in the Premier League last season and had three key players out of action. Long term knee injuries to defender Phil Jagielka, midfield star Mikel Arteta and striker Yakubu didn’t hinder Everton’s progress last season but this season its proving hard for Moyes to field a team. The latest injuries to left-back Leighton Baines, centre-back Joseph Yobo and midfielder Steven Pienaar have been the straw that broke the camels back.

Today’s squad at Bolton was literally 11 first teamers, Carlo Nash the reserve keeper and six reserve team players. These young players aren’t ready for first team action yet, but needs must when you have so many players out injured. It got even worse for Everton today as defender Johnny Heitinga picked up an injury. He was replaced by young Irish full-back Seamus Coleman, who only made his first debut in the 5-0 hammering at Benfica on Thursday. Its now getting to the point were a lot of Evertonians don’t actually know our substitutes.

Everton are a top six team when everybody is fit. That fact has been proven in the last three seasons. Every time there’s a chance of pushing on there seems to be another star player picking up a long term injury. Whenever the squad is strengthened, another player is stricken.

One of the players who is missed most by Evertonians at the moment is mercurial playmaker Mikel Arteta. He is one of those players who can create something out of nothing and produce a match winning pass. He’s just a special player that can’t really be replaced.

A player Everton need back sooner rather than later is centre-back Phil Jagielka. The former Sheffield United defender has been the backbone of the Everton defence ever since David Moyes switched him from midfielder to defence. He formed a formidable partnership with Joleon Lescott last season and had looked really solid before picking up his knee injury last season.

He was always the talker in the side, the organiser which at the moment is missing from the side. The defence is leakier than a sieve at the moment and the absence of continuity hasn’t helped. The absence of the much maligned Phil Neville also hasn’t helped the defensive situation. For all his faults he always gives his all and shows good leadership skills.

Last season saw youngsters Jack Rodwell and Dan Gosling break into the first team out of necessity. David Moyes was down to the bare bones of his squad and these youngsters were thrust into the team. To be fair to the duo they have played admirably. However expectations of the youngsters have shot up. Moyes would have hoped to have shielded the youngsters from burnout and tiredness. With so many injuries Moyes just hasn’t got that option.

When will the injury crisis end?

The injury list is long but hopefully there’s light at the end of the tunnel for David Moyes. Some good news for Everton is that Phil Jagielka is expected back in late November and Mikel Arteta has targeted mid-December for his comeback. The likes of Steven Pienaar, Leighton Baines, Joseph Yobo and Diniyar Bilyaletdinov are expected back in the next few weeks. The extent of defender Johnny Heitinga injury is yet to be established but its not expected it to be serious.

Move up the table

The return of some key players to the squad will give the whole club a lift. If by Christmas Everton have sufficient squad members to fill a team I feel a challenge for Europe is not out of the question. However if the current injury problems continue then it will be a long hard season for the unlucky Toffee’s.

Surely Everton defense would be strengthened by playing Lucas Neill?

Lucas Neill played yesterday but Johnny Heitinga was injured with the score at 2-2. That really did change the game.