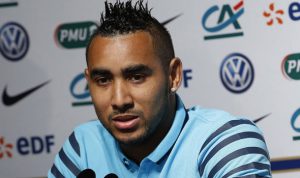 For the second game at Euro 2016 hosts France left it very late to secure maximum points, as Les Bleus secured a 2-0 win over Albania through a 90th minute header from substitute Antoine Griezmann and a stoppage-time effort from Dimitri Payet.

For the second consecutive game West Ham playmaker Dimity Payet scored and was a big influence for Didier Deschamps team.

The 29-year-old now seems to be one of France’s key players and it now seems he could be the key to French success at their own tournament.

From outcast to star

Payet rise to France’s star player has been incredible. He is now the star amongst a squad that includes the likes Antoine Griezmann and Paul Pogba. It must be a great feeling for Payet to be so important to his national team, having been frozen out because of question marks of his attitude.

He was considered too much of a maverick or an individual to represent his national team on a regular basis. However that was while he was plying his trade in Ligue One with Marseille. A highly-impressive campaign in the Premier League with West Ham was too hard to ignore for Didier Deschamps.

The fact that Payet has won just 21 caps for his country at 29-years-old, despite undoubted talent, suggests that the hierarchy of French football really did not fancy the guy.

Something was awry and the fact that he made his debut for Les Bleus in 2010 and did not win another cap until 2013 suggests he was still developing as a footballer. Payet has matured and has won more caps this year than in any year since making his debut.

Has Payet’s attitude towards the game changed or has the French attitude towards Payet changed in the last 12 months? It may have been a little bit of both, but one thing is for sure Payet previously ignored brilliance is now one of the key ingredients in a team that seems to still be settling in their home tournament.

Teammates need to up their level

Payet has now scored twice and produced one assist, but both of France’s wins at Euro 2016 have been secured very late against teams who are of nowhere near the same standard of their hosts. Both Romania and Albania defended doggedly and there are no easy opponents at this tournament it seems.

The likes of Griezmann and Pogba were disappointing in the opening game against Romania and it took a wonder strike from Payet to give the hosts an opening game victory. Without him the atmosphere around Les Bleus camp would have far flatter going into last night’s game against Albania.

The aforementioned pair came off the bench against Albania having been dropped and made an impact, as Griezmann headed home the opening goal for France.

The pair are likely to be restored to the starting line-up for future games, but everybody in the France squad will now be aware they are not indispensable and will have to perform to stay in the team. Les Bleus boss Deschamps does have very good options available to him.

Some doubts about France

France are still favourites to win Euro 2016 at odds of 10/3, but Deschamps team have looked vulnerable in their first two games against two unambitious teams. Their defence is aging and suspect, especially veteran full-backs Bacary Sagna and Patrice Evra.

France have a lot of talent going forward, including the majestic talents of Payet. They may have shown a lot of spirit to win their opening two games, but the fact that they needed such late goals suggests that they are not quite the finished article as a team.

Les Bleus certainly have talent and one of the most in-form players at the tournament in Payet. However if they face better opposition they may be found out and Didier Deschamps’ side may not have all the attributes to go the whole way.

Will Dimitri Payet continue to be France’s key player?