Robben could go to MLS or China 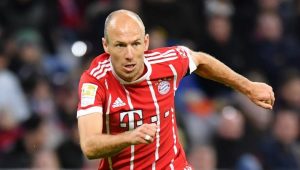 Arjen Roben’s time at Bayern Munich is bound to end this summer. After player over 300 matches, scoring over 140 goals and winning at least 18 trophies – the number could grow before the season ends – the amazing Dutchman will be moving away from the Bavarian club.

His contract is supposed to end on 30 June and considering his age – he turned 35 this January – Bayern will want to make a move towards younger players and some of them are already rumoured to be coming to Munich, including Lille’s Nicolas Pepe.

This means Robben will be able to move to a new club without a transfer fee and clubs from MLS and Chinese Super League are reportedly interested. The lucrative contracts could be found in both leagues, as MLS still operates on Designated Player rule, while China will definitely want to add another star to their growing competition.