Romelu Lukaku must prove he is big time 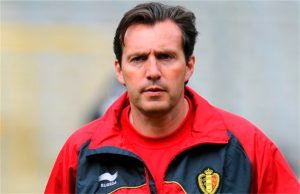 For much of his career Belgium and Everton striker Romelu Lukaku has felt the need to tell everyone how good he is and then shoots himself in the foot by underperforming in big games.

The striker played for 73 minutes and was replaced by Liverpool star Divock Origi, after putting in a highly-ineffective performance, which seemed to lack energy or effort.

Needs to turn up on the big occasions

There is nothing wrong with players having confidence in their own ability. In fact most of the best players in history have a touch of arrogance. However that confidence needs to be backed-up by big performances and helping teams to silverware.

Romelu Lukaku has a habit of not performing on the big stage. His performance for Everton against Manchester United in the FA Cup semi-final defeat was case in point. He missed a number of chances, including a penalty kick that he never looked confident of scoring.

His opening performance for Belgium was another example, as he missed arguably the best chance his team had, putting it narrowly wide of goal. Truly top players put away the chances when they get them and that is why they are truly top players.

Let his football do the talking

We all know that Romelu Lukaku is a good footballer and he is still relatively young. He could go on to become a world-class striker in the future, as he does seem to have all the physical attributes to be the complete striker.

However, for some reason he feels the need to come out in the press every couple of months to let them know he should be playing at a higher level than Everton. Well Romelu you were at a club in the Champions League at Chelsea, but you were not willing to fight for a starting place in their team.

Even at a very tender age he thought he was a world-beater, when in truth he was just a very promising young player.

Last season was the best of his professional career when it comes to goals, as he scored 25 goals in all competitions for Everton. For much of the campaign he dragged the team through with his goals.

His goals led to Lukaku being linked with a number of so called ‘big clubs’ and the talk of a move seemed to go straight to his head, as he lost focus and failed to find the net in the last ten games of the campaign.

Every striker goes through goal draughts during their careers, but most still strikers still put in a shift for the team, Lukaku seemed to lack any willingness to work for the team, although most of the Toffees players seem to down tools towards the end of Roberto Martinez’s reign at the club.

Lukaku believes he is a top striker and no doubt he will get a big money move this summer. By all accounts he is an intelligent guy, but he needs to learn to keep his own counsel. He still has a bit to go to become the top player he thinks he is.

A big decision for Marc Wilmots

Following Lukaku’s unconvincing display in the Italy game the forwards odds of winning the golden boot have lengthened to 25/1.

Belgian boss Marc Wilmots may have a big decision to make about whether to persevere with the striker or use his other highly-rated forward options. Divock Origi and Marseille’s Michy Batshuayi are good alternative attacking options for Wilmots.

The Red Devils were dark horses to win the trophy and are the highest ranking team in the competition. Wilmots will be under a certain amount of pressure to deliver in France, which will be more difficult following the opening game defeat.

Romelu Lukaku still has time to make a big impact at Euro 2016, but instead of talking about how much ability he has, he should instead show it on the pitch, as he still has a lot of work to do to convince everybody he is truly a top striker.

Is Romelu Lukaku a top striker?