Ronaldo vs Griezmann – Who will shine in the Euro 2016 final?

After a month of high-quality football, intense drama and some unforgettable moments, we move into the final of Euro 2016. France vs Portugal. Ronaldo vs Griezmann.

Before the start of the tournament, nobody considered Portugal to be a serious contender for the title. Very few had thought Fernando Santos’ men would reach this far. 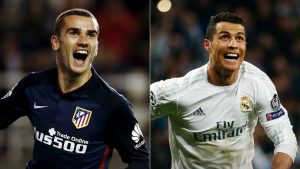 They didn’t win a single match from their group and were fortunate enough to have made it into the knockout stages.  In the round of 16, a late extra-time goal against Croatia saw them through while reached the last four after a tense penalty shoot-out victory over Poland. Portugal are a one-man team and their game revolves around Cristiano Ronaldo. The Real Madrid superstar had been below-par to his usual standards and apart from a brilliant goal against Hungary hardly left any impact in the tournament. But, great players need big occasions to show their true colour. And Ronaldo stepped up in the semi with a majestic spot-jump header that will remain etched in our memory for a long time.

Against France, Portugal will start as a massive underdog. For mainly two reasons. First, France are in a rampaging form at the moment. The confidence is sky high after beating Germany 2-0 in the semi-final. They are simply unstoppable at the moment. Secondly, France have a psychological edge over Portugal, having won their last 10 matches against them.

If Portugal are to win this one, they need a huge slice of luck plus Ronaldo to fire all cylinders. Ronaldo has won lots of trophies with Manchester United and Real Madrid but has little or anything to show far for his nation. He came close to winning the Euro in 2004 but ended up with a runners-up medal as Portugal lost to Greece in the final. He has been presented another opportunity here. In 2004, he wasn’t the superstar player for his team. There was Figo, Maniche, Deco and others who held that status. But here, he is the real leader on the pitch. Should Portugal win against France, not only his chances of winning the Ballon D’Or will be all but sealed but people will appreciate his ability and instead of engaging into a silly ‘who is better Messi or Ronaldo’ debate give him the due credit that he doesn’t always get. 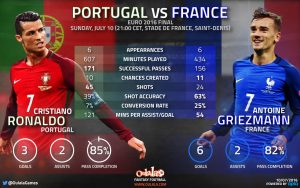 Ronaldo is a complete footballer. He has pace, great dribbling skill, can bamboozle defenders by going instep and a great goalscorer. He is strong with his headers while can take shots on target with both feet. He is a legend. Arguably, one of the greatest of all time.

Griezmann simply doesn’t come in comparison with the Portuguese. While Ronaldo is playing at the peak of his career, Griezmann is someone who is on the rise.

This diminutive young player from Atletico Madrid is a jewel for his club and country. Usually left footed players are more artistic – Rivaldo, Robben, Messi, Guti or may be Shaqiri. You can safely add Griezmann to that list. The best part of his game is he is versatile. Started his career as a winger, he can play multiple positions but it is behind the striker in the free role where he is most dangerous.

Griezmann has a fine dribbling skill and he is good at making intelligent passes as well. Ronaldo is at times gets criticised for being selfish as he tries to do too many things all by himself, but Griezmann brings other into play. He is much more than just a goal scorer. The area where he has improved a lot in the last two-to-three years is at getting into the scoring zone and hitting the ball on target on a consistent basis. In his first season at Atletico, he scored 25 goals in all competitions, and last season he improved the tally to 32. He is always hungry to score more and that’s a great sign for an attacking forward who is equally a brilliant team player.

Last time when Ronaldo and Griezmann faced each other, it ended in a despair and heartbreak for the Frenchman. He missed a penalty in the Champions League final against Real Madrid, while Ronaldo won it for his side with the final kick of the match. Who will have the last laugh on Sunday?