Roy Hodgson gets it right eventually 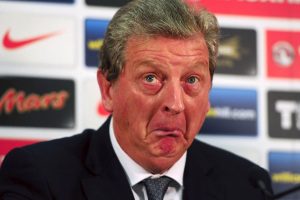 England qualified for Euro 2016 with a perfect record and there was excitement around the squad.

However just before the tournament started Three Lions boss Roy Hodgson seemed to get all excited and want to play around with his options.

Unfortunately it has produced mixed results. A last-gasp 2-1 win over Wales may just paper over the cracks of the fact that he failed to pick the right players to start the game. To be fair he did finally get it right with his half-time changes.

Those substitutions were spot

I am no football manager. However I am a legend in my own lunchtime on football manager. At half-time I was telling everybody that would listen that Harry Kane and Raheem Sterling needed to be replaced by Daniel Sturridge and Jamie Vardy.

I do not have a great tacticians mind, sometimes I struggle to switch the light switch on, but the changes Roy Hodgson made were what the team was crying out for. England needed two players who knew were the net was on the pitch and did not need a SAT NAV to find it.

If anybody who knows Raheem is reading this (unlikely I know) you know what to get him for Christmas. Harry Kane is walking around like he is on a promise from a liar. He just looks so devoid of confidence, especially for a player who has just won the Premier League golden boot.

For me Liverpool striker Daniel Sturridge is probably England’s most natural goal scorer. If he keeps away from injury he has the potential to be a fantastic striker. He started the last World Cup as England’s main striker.

The 26-year-old may just have played himself back into the team with his stoppage-time winner against the Dragons. He also had a hand or foot in the equaliser for fellow substitute Jamie Vardy.

Vardy has so much confidence at the moment that he could probably walk on the River Seine at the moment. I am not sure if he has sold his soul to the devil to get to the position he is at the presence time, because the last few years of his life have been like a Roy of the Rovers story.

Five years ago Vardy was probably more likely to be in the Rovers, than on a football pitch, according to Leicester’s current vice-chairman Aiyawatt Srivaddhanaprabha in an interview with the Daily Mail.

Hopefully at least poor Harry Kane can have a rest after a constant two years of football. His poor 22-year-old legs must be knackered. You put your feet up Harry lad.

Vardy and Sturridge must start the next game. They showed that they have the hunger to score goals, something that Kane is missing for some unknown reason and something that Sterling has never really had in his locker.

The complexion of the group has changed

Sturridge’s stoppage-time winner has changed the complexion of the group completely. England are now top of the group with their last group game against Slovakia, a game which they are odds of 7/10 to win.

A win and topping the group should give England a far more comfortable passage in the knockout stages. Even a draw could see the Three Lions win the group, depending on how the other game in the group goes between Wales and Russia.

England have somehow stumbled into the lead of the group, despite Roy’s poor selection for this game. He got it right with Plan B, but in truth plan B should have been Plan A for this game, because quite simply Kane and Sterling were poor in the opening game.

Hopefully Roy will have learnt some lessons about his promising squad and we do not have to rely on the veteran’s tactical nous to bail us out in the last game against Slovakia.

Will Jamie Vardy and Daniel Sturridge start the Slovakia game?