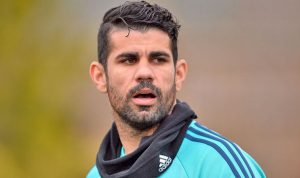 Everybody has now accepted that last season was a nightmare for Chelsea and most of the people connected with the club.

The terrible start, the sacking of Blues legend Jose Mourinho and then tenth place finish will be something that Blues fans will want to forget in a hurry.

One player’s form that drastically declined was striker Diego Costa. The Spaniard was poor in the first half of last season. In fact, Costa found the net just three times before Christmas in the Premier League.

In fact, Costa found the net just three times before Christmas in the Premier League. From Boxing Day to the end of the campaign, Costa hit form, scoring nine times in 14 appearances in the top-flight.

Doubts were raised by that poor start

Everything was rosy in Costa’s debut campaign at Stamford Bridge. The Blues won the Premier League title and the Spaniard fired home 20 goals. Everybody seemed happy to ignore the dark side of the strikers character or at least put up with it.

The fans just accepted that it was part of him. While Chelsea was winning there was no problem. However, when things got tough last season, those question marks over the striker’s temperament was magnified.

The striker missed six Premier League games because of suspension last season. When Costa is frustrated he is a dangerous animal. Chelsea’s struggles must have frustrated the hell out of the striker.

Suddenly Chelsea fans seem to have turned against the striker. He does not seem to be the hero of his debut campaign. Blues fans are now actually stating that they would sell the striker. No longer is Costa the messiah of Stamford Bridge, he is old news.

Just like one good season does not make a good player, one bad season does make a bad player either. Costa is still a very effective striker. He will still get goals for a team, especially given the right service from his teammates.

The 27-year-old just seemed to fall into the general malaise of the rest of the Chelsea squad. As previously mentioned his best performances and the majority of his goals came in the second half of the season.

Those performances came under Guus Hiddink, but not Jose Mourinho, who he seemed to have forged a bond with in his debut campaign. Next season there is no doubt he will be prolific in front of goal.

Costa has a scoring ratio of better than a goal every other game, which is good by Premier League standards. He is a striker that can sniff out a goal, a poacher. He is a good technical striker.

I can see Costa staying at Chelsea

Reportedly Diego Costa wants to leave the club and return to Spain. His former club Atletico Madrid have been sniffing around. However, their management can’t seem to make a decision over a move for the striker.

Different quotes have been released supposedly from the Atletico hierarchy about Costa. It seems to me Costa is more likely to stay put than move on this summer. After the summer transfer window shuts the striker is odds of 3/10 to still be at Chelsea.

New Chelsea boss Antonio Conte is known as a big disciplinarian. The Italian boss may clash with Costa, but he could also help the striker thrive.

The Spanish international played under a boss with a similar sort of approach at Atletico Madrid in Diego Simeone. The result was a spectacular success for Atletico and a move to Chelsea.

Whether Costa stays or goes this summer may well depend on what sort of formation that the Blues plays next season. Conte is a big fan of 3-5-2, which was the formation he used with Italy at Euro 2016.

The Blues spent £33million on young Belgium striker Michy Batshuayi earlier this summer. His signing was rather seen as the end for Costa at Chelsea. However, the Blues are not blessed with that many forward options.

Costa, Batshuayi and Loic Remy are the only senior strikers in the Chelsea squad. If Conte plays with two up front, then I have no doubts that Costa will stay. I believe if he stays at Stamford Bridge this summer he will again be prolific next season.

Are you serious? There are so many repetitions in there of ENTIRE PARAGRAPHS that I couldn’t make myself read the entire story…