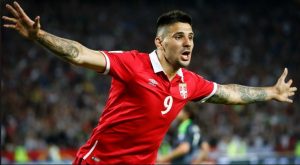 Aleksandar Mitrovic is expected to be on the move this summer and now we have the first potential bidder for the striker. The Serbia international has had a great 2018, getting promoted with Fulham to Premier League and then doing great with national team to score 12 goals in the calendar year and participate at the World Cup.

But after a terrible season his club has had, the 24-year-old could be leaving Craven Cottage and such scenario is expected. According to the Express, Southampton are planning a £30 million bid for Fulham striker. Mitrovic scored 11 goals for Fulham this season but his future is up in the air after the club were relegated from the Premier League.

Scoring 11 goals at such a disrupted team is good turnout and Ralph Hasenhuttl will want to drastically improve his team, especially the forward line, now that the Saints are safe in Premier League. Also, Crystal Palace are keeping an eye on the Serbia star’s situation, as they could pair him up with his compatriot and club captain Luka Milivojevic.