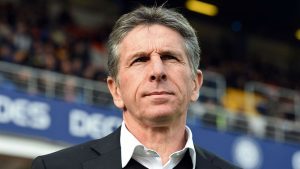 It seems a familiar story for Southampton fans now. A boss impresses for a couple of years and then heads for a more ambitious club.

Mauricio Pochettino did it when he joined Tottenham and last summer Ronald Koeman joined Everton.

The appointment of former Nice boss Claude Puel as Koeman’s replacement was a risk.

However, if Saints defeat Chelsea on Sunday and results go their way the south coast club could be in the top-six.

The Saints experienced an inconsistent start to their Premier League campaign. However, their only league defeats of the campaign have come at Manchester United and Arsenal. The latter defeat was a harsh one for Claude Puel’s team.

It seems the players have bought into Puel’s ideas and it has reaped rewards for the south coast side. One defeat in their last ten games in all competitions is a pretty good record for a team that were surrounded in uncertainty at the start of the campaign.

Southampton achieved last season’s sixth-place finish under Koeman by being defensively sound. This season the Saints have regained that defensive solidity under Puel, with only Tottenham conceding less than Southampton’s tally of eight goals.

Puel’s team are not an easy side to break down and have kept clean sheets in eight of their last ten games in all competitions. The Saints have not been prolific in attack, though, as they have only scored 11 goals in nine outings in the top-flight this season.

There is definitely room for improvement for the Saints. However, the form of young winger Nathan Redmond in a more central role has been encouraging. The former-Norwich star has now scored in consecutive matches in the top-flight.

Striker Charlie Austin has also shown signs of getting back to his best with four goals in eight appearances for the Saints in the top-flight this season. If the pair can find consistency then Puel’s team will be a very dangerous team to come up against for the remainder of the season.

Whenever a new boss takes over at Southampton there is talk of the Saints progress stalling. There have even been predictions that the south coast team would be relegated from the Premier League. This summer there was similar talk, but not on the same scale.

Koeman had built on Pochettino’s work and made the Saints a very solid Premier League outfit. The Dutchman’s exit from the south coast was a rather bitter one. The Saints board had to be shrewd with their next appointment. It seems they were with Koeman’s successor Claude Puel.

Southampton have been very clever with their managerial appointments in recent years, going back to Nigel Adkins. Every new boss has built on what the man before achieved. Puel looks to be a decent choice as well.

The Saints owners choice of boss have been key to the Saints becoming such a steady Premier League club.

Outsiders for the top-six

Last season Southampton finished sixth in the Premier League table, just three points behind fourth-place Manchester City. The Saints form has improved of late and they are now odds of 4/1 to finish in the top-six this season.

Those odds suggest that the bookmakers consider the Saints as outsiders to repeat last season’s feat. This season the race for those top-six positions will be even fiercer than ever.

The likes of Arsenal, Manchester City, Chelsea, Liverpool, Tottenham and Manchester United will all be competing for those top six spots. Everton under former Saints boss Koeman are also considered contenders for a European spot.

The odds look stacked against Southampton achieving a top-six spot. However, the Saints are accustomed to upsetting the odds and should not be completely written-off in the fight for those top-six spots.

Southampton face a test of that decent recent form when they welcome in-form Chelsea to St Marys on Sunday afternoon. Chelsea head to the south coast having recorded three consecutive wins and three clean sheets in their last three top-flight games.

Puel’s side will be underdogs for the clash. However, the game is a good barometer to show if the Saints are still indeed progressing under their French boss.

Can Southampton finish in the top-six this season?