Super Mario helps Italy down Germans but can they defeat Spain? 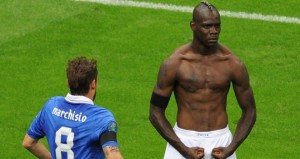 Manchester City striker Mario Balotelli was the hero last night as Italy scored an unlikely 2-1 victory over Germany in the semi-finals Euro 2012.

The big striker was unstoppable in the first half as he scored a brace and was a constant menace to the German defence.

Mario Balotelli has the potential to be a truly great player and last night he proved he can perform at the very highest level. In that first half the Germany defence just couldn’t handle the striker as he was constantly on the move.

He took both of his goals superbly and his second was a fantastic finish. Nobody has ever questioned his quality but his temperament has always been in question. Last night there was barely any sign of his usual histrionics.

He put a shift in for the team and played his role superbly. I’ve also never seen him work as hard as he did last night. He was chasing down defenders and causing all sorts of problems.

Last night Germany didn’t play with the usual swagger that had won them the previous 15 competitive games. They were flat and looked scared of Italy at times. I think Joachim Low tried to change from his tried and trusted formation and it failed.

In the second half they did better but they had to because they were chasing a two-goal deficit. Had Germany played like they had in previous matches then maybe they would have had a chance, instead Low changed things around and it cost them.

However, you can’t take anything away from the Italians every player on the pitch was superb. From Gianluigi Buffon in goal to Balotelli up front every player had a good game and in truth in the second half they could have scored more goals on the counter-attack, with Germany rushing forward trying to find a way back into the game.

One of the key players throughout this tournament for Italy has been midfield metronome Andrea Pirlo. The Juventus midfielder has been Italy’s midfield brain for along time and he has hurt most teams he’s played against at Euro 2012.

Germany gave Pirlo the time and space to operate last night and you simply can’t allow him that. I think they were slightly arrogant in not having a game plan to deal with Italy’s midfield maestro.

It will be far more difficult for Italy against Spain in the final on Sunday. Midfielder Pirlo won’t be given the sort of time and space that he has been allowed in previous matches. Spain’s game is based on pressurising their opponents and possession football.

Spain will keep the ball far better than Italy’s last opponents Germany and they will probably have somebody permanently pestering Pirlo for possession of the ball. Spanish coach Vicente Del Bosque may even revert to playing without a recognised forward.

That would mean six players in the midfield crowding Pirlo so he won’t have the same amount of time and space to create for his team.

The Italian national team seems to triumph in adversity. Every time they have won international silverware its been on the back of scandal in their domestic game. This season there was another match-fixing scandal involving players and coaches.

It may not have been as major as previous scandals but it certainly put a shadow over Italian football. Yet again though the national team has came to an international tournament and helped lift the game and morale in their home country.

Italy will go into the final with the Spanish as underdogs. However, they were underdogs in the semi-final and showed what they can do. Cesare Prandelli’s side seem to favour the underdog role and I certainly wouldn’t back against Italy at this point.

Spain are still a good team and I would expect them to prevail but if they underestimate the Italians they could be in for a big shock on Sunday night.

Can Italy defeat Spain in the Euro 2012 final?

After the semifinal show against germany, i think there is a chance to prove again in final for italians.

Ballotelli is a player who can easily beat the offside trap..Spain needs to hold him down. The midfield battle would be great but spain should avoid Pirlo’s poised passes that cut through thick defence…expect a great football match on sunday….