Tagliafico has a clause to leave Ajax in 2020 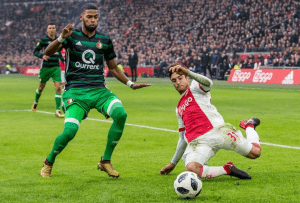 Ajax have done it! Maybe they did not reach the Champions League final, but after a heartbreaking loss, they did what they exactly needed – they have got their hands on both domestic trophies. After a 4-1 win against Utrecht and PSV’s loss against AZ Alkmaar, Ajax are going to win Eredivisie after winning KNVB Cup last weekend. And when Nicolas Tagliafico confirmed he is going to stay at the club next season, it was another big victory for the Amsterdam club.

However, Ajax1 claim that Argentina international has added a clause in his recent contract extension that allows him to leave for €20m at the end of next season. Tagliafico recently signed a new, improved deal with the club and Ajax1 also claim that if the fee exceeds €20m then he and the club split the remainder.

The 26-year-old, who starred in Ajax’s march to the Champions League semi-final was signed for only €4m in January 2018.