Wales have put England to shame at Euro 2016 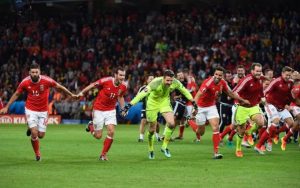 As an Englishman with Welsh roots I endured mixed feelings as Wales defeated Belgium 3-1 to make it to through to the semi-finals of Euro 2016.

Tinges of regret about my national teams failings were replaced by pride for a country that runs through my DNA.

I cannot imagine how born and bred Welsh people feel after their team’s tremendous performance, but I feel privileged to have watched such a sporting achievement.

The Welsh players did themselves and the country proud.

In truth I support all the home nations at international tournaments, but the Wales victory over Belgium was simply brilliant to watch. To a man those Welsh players showed passion, pride and above all ability.

Belgium headed into the game as favourites due to their rank of second best team in the world rankings, but they were out-fought and out-thought by the Dragons. The likes of the highly-rated Romelu Lukaku, Kevin De Bruyne and Eden Hazard disappeared when the going got tough.

Whereas Welsh stars Hal-Robson Kanu and Sam Vokes took it upon themselves to up their game and make vital contributions. The accusations of Belgium being a bunch of individuals were proven to have some truth, as the better team triumphed.

Boss got it spot on at Euros

Wales boss Chris Coleman has done an excellent job. He had a tough task taking over the role when former-boss Gary Speed sadly past away, but he has excelled by transforming the Welsh national team.

His tactical decisions have been spot on in France so far. He has sent his team out with a good tactical plan in every game at Euro 2016 and it has yielded four wins from their five games in the competition.

His inspired substitutions have also been a part of Wales campaign so far. Imagine England fans, having a team that actually had a boss who had a tactical plan and got the players to play to it. It’s just sensible management really.

Coleman himself admitted after the game that he has had more failures than successes in football, but the former-Fulham boss has always got back up when he has been knocked down. He looks to have also learnt from the mistakes of his past, something other bosses have had a problem with.

All his failures as a boss in the past will fade into obscurity because he has helped the Dragons achieve their biggest ever footballing feat and hopefully he will be acknowledged for his role.

Wales star player Gareth Bale spoke about the Welsh having more pride and passion before their encounter with England in the group stages. That was a hard fact to argue with, even some Englishman agreed that the Wales players had more pride representing their country than the players of England.

Wales is a patriotic country. The player’s passion and pride has become a hallmark in every sporting arena, whether they are playing football or rugby. The Welsh just seem to give their team more than their English counterparts.

It seems almost like sullying the Welsh success by comparing the two teams achievements, but it is hard not to compare, when one team has produced such a magnificent display and the other went home after arguably producing their worst ever performance at a major competition.

Pride and passion are not the only hallmark of the Welsh team. Everybody connected with the team seems to show a great modesty and humility that would be alien to any of those over-paid pre-Madonna’s that wear the England shirt.

The post-match interviews with the likes of Coleman, captain Ashley Williams and striker Hal-Robson Kanu illustrated that perfectly. They are proper down-to earth people who give their all for the country they represent.

Wales headed into Euro 2016 as underdogs to make it out of their group, yet somehow in their first ever European Championships they are in the semi-finals. The Dragons take on Portugal on Wednesday night, in a game that they are odds of 16/5 to win.

They are once again considered underdogs, but from both teams showings in France it is highly realistic that Coleman’s side could be heading to the final of the competition.

Wales have been brilliant throughout the competition, but in the win against Belgium the Dragons showed all the team’s best attributes and they have gained their reward for it with a place in the last four of the competition.

No matter what happens in that semi-final on Wednesday night, the Wales players will return home as heroes as they have done their country proud.

Quite simply they have put their big bad neighbours to shame in France and hopefully can go all the way to record an unbelievable sporting feat.