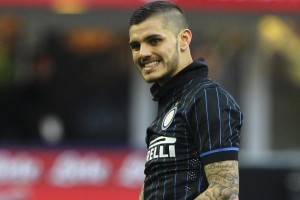 Mauro Icardi’s time at Inter Milan has become a very difficult one. The player has been having issues with the head coach Luciano Spalletti and teammates and all things escalated when Icardi rejected to travel to Vienna with the team to play in a Europa League match, following the change of captaincy in the team. However, his girlfriend and agent Wanda Nara spoke to Italian media about Icardi’s situation.

“Mauro continues to score, he goes ahead because he is the strength of the family,” she told Verissimo.

“Now he is calmer, he embraces everyone because he has always had a beautiful relationship with everyone. We will be here [at Inter] again next year”, Wanda Nara concluded.

Icardi joined Inter from Sampdoria in 2013 after scoring 10 goals in his debut Serie A campaign. He’s scored double-digit goals in each of his seasons with Inter aside from his first, with his best campaign coming in 2017-18 when he scored 29 goals in 34 Serie A appearances.