Wayne Rooney should not be first choice striker for England 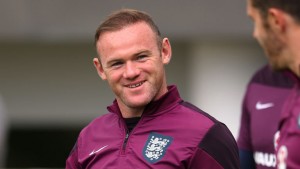 Wayne Rooney has just returned to action after injury, but his place in the England starting line-up has been questioned by some

Manchester United and England captain Wayne Rooney made his return from injury in an under-21 fixture for United against Middlesbrough last night.

The forward has missed the last six Premier League games through injury, but could return to the Red Devils squad for Wednesday’s FA Cup quarter-final replay against West Ham.

Rooney has a lot of work to do to reclaim his place in the England starting line-up for this summer’s European Championships though.

Not had the greatest of seasons.

Wayne Rooney’s form has not been great this season and I am sure he would be first to admit that. He has not quite found his top form for the Red Devils and that has led to calls from United fans for the striker to be dropped.

In the end injury curtailed his campaign and in his steed youngster Marcus Rashford took his opportunity to shine up front for the Red Devils. There is no doubt that when Rooney is fully-fit he is likely to be thrown back into the starting line-up.

However, unlikely some players who hit the ground running after injuries, Rooney takes a while to get back to peak fitness, which should put his place in the England starting line-up this summer in jeopardy.

English strikers on fire this season

Tottenham striker Harry Kane and Leicester star Jamie Vardy have been so hot this season that the fire brigade would struggle to put them out.

Their respective teams are fighting for the Premier League title and it is difficult to remember England heading into a major international championship with two strikers in such good form.

Kane is currently top of the Premier League scoring charts with 22 goals this season and is closely followed by Vardy with one less in the top-flight.

The pair are very different players and as a partnership could be perfect together, but it is unlikely the pair will get used that way this summer by Roy Hodgson.

Rooney is a Roy Hodgson favourite and the forward had a pretty good strike rate in the qualifiers for the Euros. However if everybody was being honest with themselves Rooney would not currently be first choice striker on merit.

England are blessed with two players that can cause defence endless problems in Kane and Vardy, so quite where Rooney fits in remains to be seen.

The most likely team selection for Hodgson for the Euro 2016 opener will be that Kane starts up front and Rooney starts in the number ten role, as it looks unlikely that the United star will be dropped from the starting line-up for the tournament.

Rooney still has a lot to give to the Three Lions team, but he will be lucky to get in the starting line-up for that Russia game, unless he hits form as soon as he returns from injury. He still has a lot of football intelligence and that is why on occasions he has been used in a central midfield position by Louis Van Gaal during his tenure.

Excitement over the England squad

There always seems to be mass hysteria surrounding the England squad going into major tournaments, usually based on absolutely nothing. The Three Lions seem an unlikely winner of Euro 2016 at odds of 8/1, but this squad seems slightly different.

This squad’s quality has been backed by simple facts and figures. Tottenham midfielder Dele Alli heads into the tournament on eight top-flight goals and 12 assists, while his fellow youngster Ross Barkley has eight goals and eight assists in the English top-flight this season.

Adding those youngsters to the likes of Kane and Vardy and that is a lot of goals and assists scored by members of the England squad this season. All four of the quartet are sure to be in that England squad and will be there on merit.

Rooney’s out-put of seven goals and five assists is disappointing for a forward player of his quality. If as expected he is chosen to play in the number role then he will have to up his game, as the likes of Barkley and Alli are staking a serious claim to the role for this summer’s tournament.

I would say the majority of England fans do not believe that Wayne Rooney should be England’s first choice striker this summer. Surely Roy Hodgson can see that Harry Kane is a far more potent weapon? If not then he does not deserve to be England boss.

Should Wayne Rooney start at Euro 2016 for England?