Will Euro 2012 be the tournament that Germany take their first step to world domination? 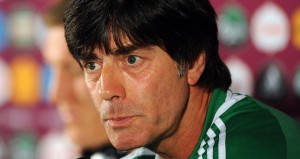 Germany head into their Euro 2012 semi-final against Italy this evening as heavy favourites.

The current Germany team is regarded as one of the best that they have produced in along time and contains some of the brightest players in Europe.

I recently read that the average age of the Germany squad is 24.4 years of age, and it would have been even lower had striker Miroslav Klose not been part of the squad. Germany haven’t just got a few young talents players they have a generation.

The likes of Sami Khedira, Mesut Ozil and Thomas Muller have became household names in the last few years, as this exciting young German side have matured into a superb team unit.

German teams of the past have not always been associated with passing, attractive football. Most German teams were famous for their efficiency and hard work. This team has those typical German qualities but also that X-Factor.

Not only do they have the steel, they have the skill to match it. Ozil, Muller, Mario Gotze, Marco Reus and Andre Schurrle are all technically gifted players. These players could be part of a Germany team that not only dominates European football but also world football.

Although Germany has lots of young emerging talent their key player is midfielder schemer Bastian Schweinstieger. The 27 year-old is the midfield fulcrum of the Germany team. The Bayern Munich ace started off as a winger but has been converted into a midfield playmaker with great success.

Schweinstieger makes his team tick and hardly ever loses the ball. He is Germany’s equivalent of Spain’s Xavi or Andrea Pirlo of Italy. He seems to be playing the game with his slippers on at times, the game comes that easy to him.

His passing, composure and willingness allows the likes of Ozil, Muller and Lukas Podolski to produce their best work in attack. Schweinstieger and Real Madrid’s Sami Khedira form a superb partnership in the middle of the park for Germany.

Schweinstieger picked up a knock against Greece in the quarter-final clash but has recovered in time to take part in the vital clash with Italy.

Germany is currently on a world record breaking run of 15 consecutive wins in competitive matches. However, Italy have been something of a bogey team down the years for the Germans and nobody in their camp will be complacent.

The last time Germany picked up international silverware was at Euro 96, when they won the competition in England. Germany have become accustomed to picking up the big trophies but have been through a lean spell in recent years.

This lean spell lead to a reorganisation of the whole football structure in Germany. This re-structuring of the game lead to German academies producing the talented young players in the current squad. Maybe England could learn a thing or two from the Germans.
Belief

There is real belief in Germany that the countries national team is set for another period of domination. This young German side have the potential to be one of the best in the world. They just have to go and prove it.

Beating  Italy tonight and a win against Spain in the final on Sunday evening could be the first step to this Germany team dominating international tournaments for years to come. If they fail though the players are still young enough to come and attempt many more times.

The scary thing is there are yet more young players being produced by Germany. Is this a new dawn in the age of German football. Whether this Germany side can prevail at Euro 2012 remains to be seen. However the promise is there and they have a fantastic chance to clinch the trophy on Sunday evening.

The sky’s for the limit. I won’t be surprised to see them win a World Cup and a Euro.